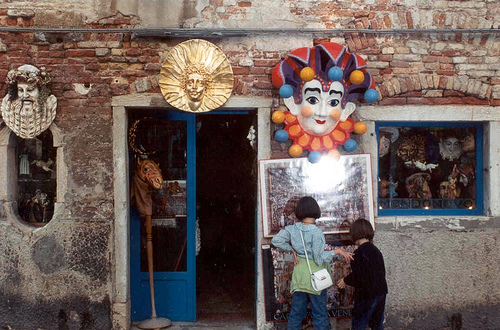 Here’s a few of my favourite photos to start off a new week and a new month.

Above you see a shop front in Venice. This was taken in 1996. My friend, D. and I arrived in Venice on a Sunday before we were to join a bus tour around Italy. We made our way into Venice and walked. And walked. The sun was out after a morning rain. We made our way from St. Mark’s square across the Grand Canal at one point, and wandered around the squares and islands on that side of the canal making our way back to the Termini for the bus back to the hotel.

The next day, the first day of the organized tour, the rain bucketed down and the walking tour of Venice was a bit damp! We were so glad we got to see it under sunny skies!

Some of the oldest houses in Copenhagen in a hidden courtyard

This photo was taken in Copenhagen. I had seen a Rick Steves travel show on tv about Copenhagen and at one point he and a guide went into a little private courtyard where you can see some of the oldest houses in the city. They are all timbered and painted bright colours. I didn’t think I’d be able to find it because they didn’t say where it was but on our last day in Copenhagen, under a miraculously bright and sunny sky (it had rained all week!) we went down a narrow cobbled street and I recognized it from the tv show. I found the courtyard, ducked in a took a few photos.

This last photo  was a “Hail Mary” shot. Local to Halifax, there’s an old Brewery, Alexander Keith’s, and they have a brewery tour in the historic old building that the brewery used to live in. It’s on the Halifax Waterfront and the tour guides dress in 18th century costume. At the end of the tour, you walk through this tunnel to the inner courtyard of the brewery. As we followed the guide, I took a no-flash photo and this is what came out. It looks very ghostly and very, very cool!