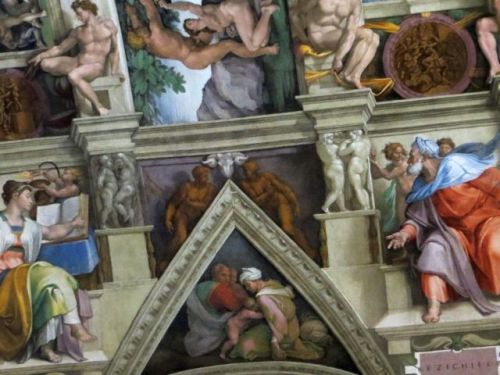 We slept in this morning and didn’t get moving until mid-morning. We basically hung around here until about 11 or 11;30 and then walked to a Metro to take it to the stop by the Vatican where we are later to meet the tour group for the Vatican Museums. We had lunch in a little cafe. I enjoyed my lasagna but the paninis  G had weren’t that appealing to him because he found the bread dry and crumbly. We also notice that they don’t put butter or dressing on the sandwiches by default.

We were early for the tour meeting spot in Piazza di Risorgimento and decided to have gelato and sit in the sunny square. The gelato was beautifully creamy and the sun was warm. The square is just outside the walls of the Vatican City which is a state/country of it’s own. If we had been visiting anywhere in it beside the museums and basilica, we would have to go through passport control. I believe the official name of the country is the  State of the Vatican City.

We were to meet our group and guide in front of a store on the square and made sure we were there 15 minutes early. It was a group of about two dozen maybe and we ended up being split into two, our group was guided by Sussana and the tour was given in Spanish and English. We had another of those radio thingys with a single earbud which worked better than the phone style receivers we used at the Colosseum.

We walked down the block and into the entrance halls where Sussana had the tickets printed. There were marble stairs up a floor and from there we went out into a courtyard, the courtyard of the acorn and yes, there’s a large sculpture of an acorn on one side. (The bronze acorn used to be near the Pantheon, they think and think it was moved here to the courtyard in the early 1600s) In the middle is a large brass ball/sphere sculpted by Arnaldo Pomodoro in 1990. Along one side are a series of panels for the guides mainly. We stood there for about a half hour while she explained the highlights of the Sistine Chapel because you can’t talk inside there. She explained some of the more important panels along the sides including one or two by Boticelli, and some by (Perugino) one of which is very important as he was the first to use perspective in a painting.

She then talked about Michelangelo and the history and story behind his painting the chapel ceiling  and the Last Judgement many years later when he was old, cranky and disillusioned. It’s interesting to find out the way the frescos are created (wet plaster, outline from a “cartoon” etched into holes, then filled in with paint). Michelangelo did the first three panels of the ceiling with one format, various scenes from the story of Noah and the Ark but then realized that from the floor, the figures in the panels looked too small so he did the rest of them with fewer people in the scenes and larger so they would be seen better from below. The last few panels were done without the cartoon outline, just straight painting onto the plaster.  The ceiling panels are all Old Testament stories, no references to the Christian era at all.

Before we get to the chapel, though, we have to walk quite a long way, through several large galleries, the Candelabra, the maps, the tapestries. A couple of them also have little gift shops along the side, naturally, and there are also cases and statues and sculptures dotted along as well. The maps are a bit less interesting we felt.  We also ducked into one room that had high, high ceilings and was completely covered in painted scenes. It was very impressive. We weren’t able to go into the Rafael rooms though. I guess it’s just not part of the tours which are mainly to get you through to the Sistine and out again. There are 17 km of galleries and museums and I’m sure it would do you in trying to see it all in one day.

Finally we come to the main event. The Sistine Chapel was built in the end of the 15th century for Pope Sixtus (thus, “Sistine”). While it is famous now for being the location that the Enclave of cardinals goes to elect new Popes, it wasn’t always used for that. Sometimes, yes, but often it was in any location where the Pope happened to be when he died. In the last hundred or so years, though, it’s always done here.

By now it’s 4:30 and the light outside is fading into night. The windows in the chapel are blocked and only ambient diffused light shows inside. This saves the paint from deterioration. You see, for the first 500 years, this was used regularly as a church and all those centuries of smoke, candlelight, incense, oil lamps and people had coated the painting with soot and dirt. A Japanese company paid millions in the 1980s to have the artwork cleaned and it took something like 16 years. When I was here before in 1996 they had just opened to the public again.

The chapel is dim inside, partly because of the lateness in the day and partly because it’s not directly lit from outside anyway. We had 20 minutes to look around and up. You are not supposed to take photos even without a flash. That always annoys me because if there’s no light, there should be no damage caused. You can take pictures elsewhere in the museums without a flash and there are very valuable paintings there too. Anyway, even though I shouldn’t have, I still managed to sneak some stealth photos and they mostly came out pretty good with a little brightness and contrast adjustment.

Our feet, legs and back were really taking a punishing through all this and we still had to walk all the way back up to the entrance/exit. Apparently not one of the tours that get guided right into St. Peter’s Basilica through a back corridor like I thought I’d booked. We did get to walk down the double spiral ramp/staircase though, which was neat. After that we had to walk all the way around  to the Basilica, go through a security xray check and by this time I was a wreck. I told Graham to go on ahead since I’d seen it and he hadn’t and I’d catch up. By the time I dragged myself to the stairs to go in, he was already at the top. A guard noticed me and I must have looked pretty bedraggled because he offered me the chance to use a lift. The problem with that was that I didn’t know where I would be inside and Graham wouldn’t find me so I struggled up the stairs which were mercifully not steep.

The Basilica closes at 6 and we only had about 15 minutes by this time. We made sure to see the Pieta, my favourite ever. She’s right by the entrance. We walked a bit through it, didn’t go all the way to the Berninni bronze canopy but could see it. The ceilings are so very high and the decoration is all very lavish, between the painting, the frescos, the mosaics and statues. It’s the largest Christian church in the world and there are markings on the floor from the entrance showing you where the edges of some of the other large cathedrals and basilicas would reach, including St. Paul’s London and the Duomo in Florence. I forgot to look for the markings to show Graham. He’s not religious at all and though it’s quite a sight to see, thought it was an awful lot of expense and effort to go to to build something dedicated to something that doesn’t exist!

We left the building just before the six o’clock bells rang and saw a changing of the Swiss Guard in their colourful uniforms. When I say “changing of the guard” don’t expect an elaborate ceremony like you might see in London. It’s just 3 of them changing their posts with a bit of marching and such. We were there at the right time to see it though and got some pictures.

Right. I wasn’t even sure I could feel my feet except for the pain radiating from them. There was no way I was walking to see if we could find a bus stop now. Taxi time again. We saw a stand at the back of the huge St. Peter’s Square. One taxi drove up and we tried to get in but a group of people pushed past us insisting they were waiting first. Fine. Another one came and a woman grabbed that out from under us too. When I third one came, I was ready to fight for it. We didn’t have to and got in. The group of people that nabbed the first cab were still milling around looking confused and glaring in our direction. I don’t know if there were too many of them or they had too much luggage or what their problem was but I didn’t much care either. We were in the cab and we weren’t getting back out.

We decided to go back to the restaurant down the road where we had that delicious steak after a rest of about an hour. I hobbled down and we got seated. Right in front of a family with small children. Now, the children were fairly well behaved but kids have this high pitched voice when excited that goes right through you when you’re not used to it. Mercifully they left when we were about half way through our meal. Their parents, to their credit, did quiet them when they got too loud. I enjoyed my meal just as much though Graham still thought the steak the other night was not to be bested. He did enjoy his meal very much. I made sure I had room for dessert this time and it was a little torte of ricotta and pears with a powdery top, presented on a plate with chocolate drizzles and a bit of whipped cream on the side. Heaven!

We returned to the hotel and caught up on computery things before bed when we finally collapsed. I think my feet and ankles were still throbbing. I did manage to roll my aching feet on a glass bottle of juice from the mini bar (yes, I wiped it down after!) which helped a little.

Thus ends our week in Rome. We had spectacular weather and though we tired ourselves out every day with all the walking, we enjoyed seeing all the famous sights of the Eternal City.