In May 2011, we took a road trip to Cornwall, the lovely peninsula on the south west tip of the U.K.  We drove down from Manchester and stayed overnight in the small cathedral city of Wells, with just enough time to explore the cathedral and a bit of the city centre. From there we crossed to the north Somerset and Devon coastline and traveled down into Cornwall, with a stop at the ruins of Cleeve Abbey and the twin towns of Lynmouth and Lynton along the way.  The sea was on our right and the moors of Exmoor spread across to our left. Needless to say the scenery in this part of the country is spectacular!

We stayed at a wonderful inn, Pendragon Country House which is a couple of miles from Camelford on a quiet road off the A39. They are winning awards and well deserved, too! The rooms are all filled with antiques with lovely fitted bathrooms. They have two big lounges with an honour bar in one and games and movies you can borrow. They have a small games room in the basement with a pool table and a video game console and there is a new conservatory that was being built when we were there that now houses their dining room and overlooks the Devon moors. For a luxury B&B, the rates are still affordable and it’s a good base for touring around Cornwall which isn’t that big. There’s a motorway straight up the centre through Truro, the capital of the area, though it’s not nearly as scenic as the lovely coastal roads.

After a hearty breakfast, our first stop was nearby Boscastle, a tiny fishing village. Almost 10 years ago, the village was devastated by flash floods. We saw some of the video in their visitor centre and it’s horrific, watching cars being tossed by the raging waters. There was a huge amount of damage but the village is slowly returning to normal now. 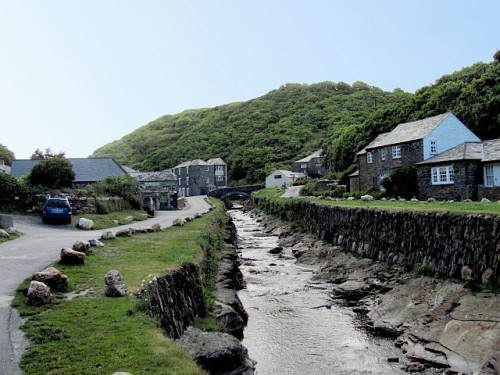 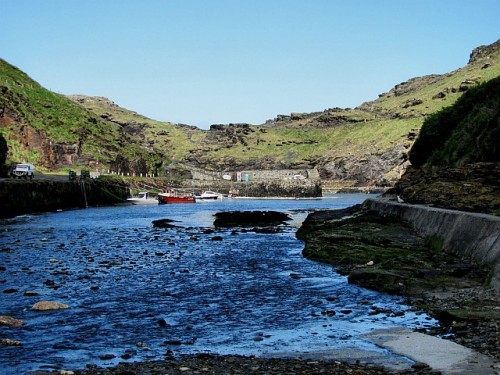 Boscastle’s harbour looking towards the breakwater.

Boscastle has pretty little shops and quaint Bed and Breakfasts. The harbour is pretty and it’s sheltered. You can walk up over the breakwater to see the sea itself but you don’t see it from the harbour.  We walked around taking photos while waiting for one of the museums to open, the Museum of Witchcraft. That was the main reason for our visit and we were not disappointed!

What an excellent little museum! They warn you right from the start that some of the exhibits may upset as they can be controversial.  The Museum of Witchcraft tells the story of how witches and the “black” art of witchcraft have been perceived over centuries. It shows many different images all through history along with related items such as talismans against curses, and mandrake root carvings. There are stories of the torture people accused of being witches were subjected to, especially in the 17th century. The museum explores all aspects, good, bad and stereotype and was very interesting! It’s a small museum but it’s packed with things to read and look at including a large Book of Daemonolgie written by King James I. Graham said it was one of the coolest museums he’d ever seen and he even bought a t-shirt with a pentagram (five pointed star) on it. 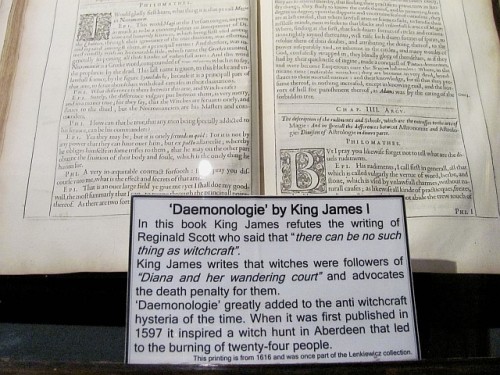 The book of Daemonologie, written by King James I 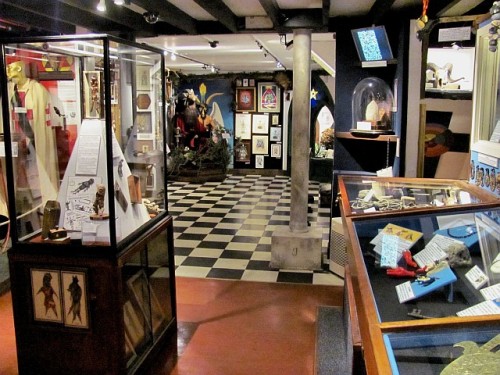 Second floor of the Museum of Witchcraft, Boscastle

From there, we drove through Tintagel but didn’t really stop. Due to its associations with the legend of King Arthur, it’s a major tour bus stop and is thronged with people. It feels very much like a tourist trap. We aren’t hikers so didn’t go up to the ruins of the castle, either.  We wanted to stop in Padstow, a popular seaside village but it was so packed that we couldn’t find a parking spot and it, too, felt too crowded to properly enjoy. We followed the coast a bit further and found a little beach at Mawgan Porth with a couple of seaside restaurants that were quiet. Perfect! We had lunch and the walked over to check out the beach.  It’s May and it’s not really beach weather but there were people sitting on chairs and socializing and another person nearer the shore in a chair watching their dog run. 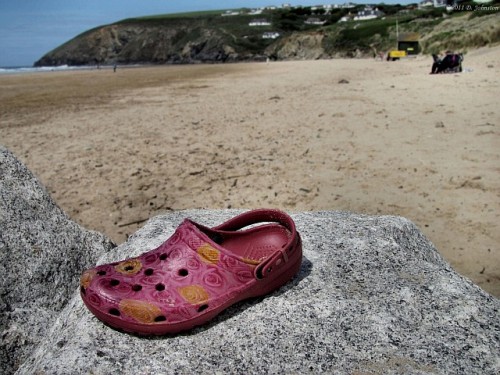 We really hadn’t got as far down the north west coast as we thought we would have and I still wanted to go all the way to the south coast to see the open air Minack Theatre so we took the motorway down to save a bit of time.  The plan was to see the theatre then come back up to St. Ives and have dinner there.

The Minack is an open air theatre created by a woman called Rowena Cade who built it starting in the 1930s. She lived in the area and wanted to start a theatre company. The theatre is created with local granite blocks, filled in with earth and has grass grown along the tops of the seating rows for comfort. The granite stage is at the bottom and the rows of seats fan out up the side of the hill from there. It almost looks as if it was carved out of the side of the cliff. There are gardens and rock gardens on the site, and you look down over the sea with a wide beach off to the left. It would be really something to attend a performance here but you are open to the elements! It was beautiful under the warm sunny skies and we poked around taking photos. We had a hot drink before leaving in the cafe that also overlooks the theatre. 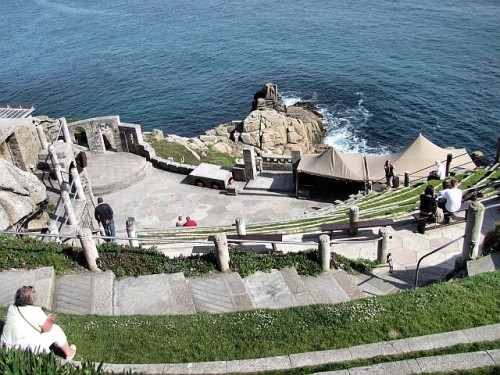 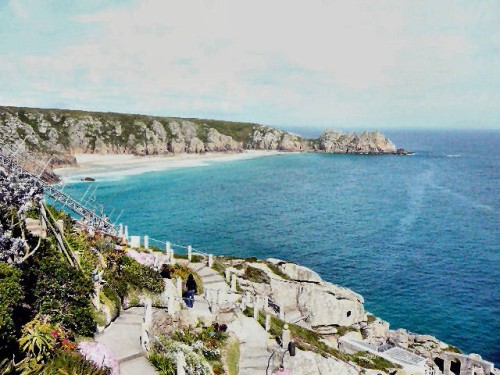 We went back to the motorway via Land’s End just so we could say we’d been there. It has a huge visitor centre and is another one of those tourist traps that see dozens of tour busses daily. By the time we got there, it was closed or nearly so. We just took a photo from the parking lot over the end of the coast rather than walk into the visitor centre and walk down the paths. Good enough. Back to the motorway and up to St. Ives, which is a very nice little town but there are a lot of *very* narrow streets that a car can barely fit through. We discovered this because our GPS kept sending us in confusing directions and we nearly got stuck a couple of times before we figured out where we needed to be and told the infernal machine to shut up!

The harbour front is lined with pubs and restaurants and we walked along trying to decide on which one to try. Most were fairly crowded at this time of the evening. The one we ended up at wasn’t probably the best choice but the food was ok. Not great, but ok. We were tired and hungry and out of energy to walk too far.  Of course the shops and museums and galleries are also closed but we did walk around a bit just to see the place. It’s a historic town and a centre for artists. Unsurprising given the beautiful coastline and light.  The old centre contains narrow roads lined with old stone cottages and whitewashed ones with cute house name signs on them like “Buttonhole”! There were a couple of main shopping streets and a little market square with a church and a war memorial cross.  There is even a branch of the Tate Modern Art gallery here. But that was also closed by this time. 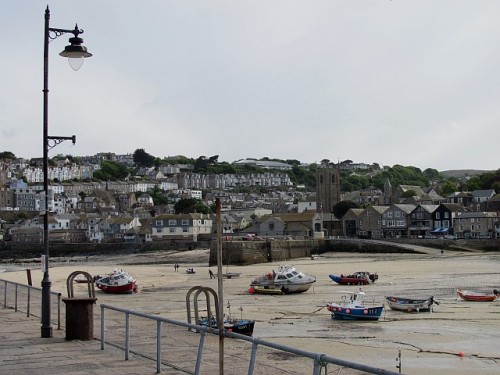 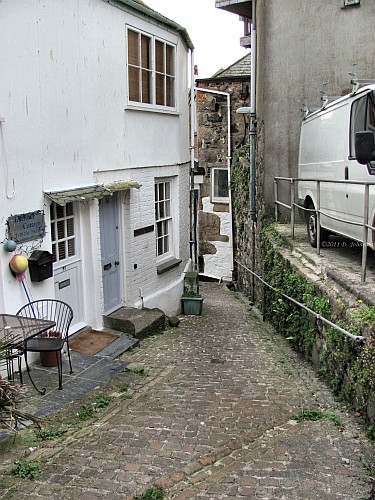 One of the narrow lanes we did NOT try to drive through! 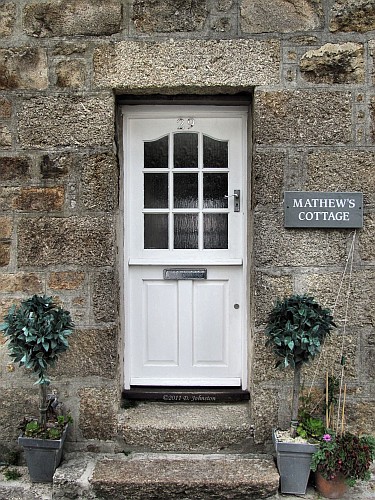 One of the little stone cottages in St. Ives 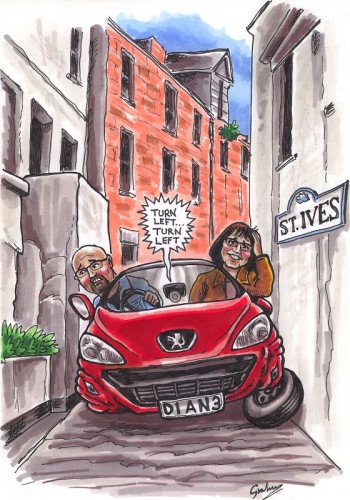 Graham is a talented artist and draws me a cartoon for my birthday every year. This one, from 2012, commemorated our experiences in St. Ives the year before

We were done. It was time to hit the motorway and head back up to the B&B. We had a drink in the bar and relaxed after a long day on the roads. We always seem to try to fit in too much! Tomorrow we’re going to a historic house and another little village and maybe some more coastal drives, depending on time and energy. But that’s another post.