From the Liberated Traveler, this week’s “Travel journey of the week” is Venice.

As it happens, I just wrote a bit about Venice recently when I described completely failing to see the famed Rialto Bridge!   But to fill in the blanks for the rest of the trip….

We had signed up for a tour from the Cosmos company, a budget version of Globus tours. The main difference is that you don’t often stay in the city centres with Cosmos, but out in the suburbs or even in neighbouring towns. This was no different and we had a hotel on the mainland in Marghera with a public bus available if we wanted to go into Venice ourselves, which my friend and I did on arrival. It took us to the train and bus termini in Venice from where we could get a vaporetto, a public “bus” type transportation through Venice.

The sun had come out and it was warm for the middle of October. (this was 1996, by the way) We did a lot of walking that afternoon and managed to find the right bus back to the hotel. The organized tour started the next morning. In the pouring rain! We all arrived at San Marco where we all headed to take cover, buy umbrellas and rain ponchos. The local guide took us around St. Mark’s square under the porticos with all the other tour groups crowding in there as well. It was a bit of a zoo but unavoidable at the time. 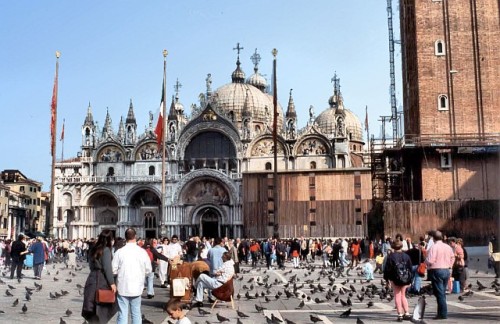 I never realized that Venice floods easily but it makes sense when you think about it. The buildings around St. Mark’s square are very heavy and Venice itself is at or just below sea level. When it rains heavily, the water bubbles up through the paving stones in the square. They put low knee high tables up all around the edges of the square and people can walk on those to get around and into St. Mark’s Basilica, which we did!  We couldn’t take pictures as the Basilica was fairly dark inside when we were in it though I heard that more lights were turned on later. It was stunning, with the frescos and the decoration. We weren’t in there all that long though because the walking tour had to continue.

It didn’t go too far, though. Just a few blocks away to an included visit to a glass blowing factory. You get a lot of this sort of thing with organized tours, as they hope you will buy the goods. That gives the tour guide a bit of a kick back, as well. They’re only paid minimally and get the rest of their money from percentages and tips. I don’t buy from these factories because I’ve always found that the prices are a lot higher than you will find in little souvenir shops elsewhere in the same city. It was interesting to see how it’s done but we were less than impressed over all. The demo was short and the sales pitch was long.

From there we were set free. The rain had stopped and we walked until we found a likely place to eat, a small cafeteria style place where we had our first real Italian pasta!

We met back at the pier at the lagoon because we booked an optional (i.e. you pay extra for it) excursion to the island of Burano across the lagoon. This is a fishing community but their claim to fame is the hand made lace. There’s a little church with a crooked steeple and the houses are all painted bright colours, apparently so the fishermen can see them from out on the water and not get lost finding their way back in bad weather. No pastels here like the rest of Italy (Italy’s buildings, if they aren’t brick or stone have a plaster coating that is painted or washed with a colour that reminds me of desert colours, shades of yellow, gold, tan, white, pink, green.  Not exactly pastels, but light warm shades to reflect the heat of the Mediterranean sun. )

The lace is still made in the traditional manner and we saw several people demonstrating it. The main street is lined with shops selling lace and things trimmed in lace so you are spoiled for choice.  The workmanship is exquisite and we did buy a few things before returning to Venice and back to the hotel for the evening. We could have stayed in Venice on our own but we were damp and tired and a bit wary of trying to get back on a bus after dark, figuring it would be easier to get lost or miss our stop. Looking back now, we probably could have got a taxi from the station but we didn’t think of it at the time.

Our tour group was mainly very nice people though most of them kept to themselves rather than socialize with the rest in the evenings. The tour guide was young and by comparison to a guide I had from another tour, lacking in skill. He’d apparently done it before and this wasn’ t his first tour season but it felt like it.

Tours are not always a bad way to go. The positive side is that you see the highlights, get expedited to the front of the lines, get lots of great information from the guides and local guides. Someone else does all the luggage handling, and all the arrangements for you. The downside is that you don’t really get to spend much time in places you want to and sometimes, more time in places you’d rather not. You do get an overall view and you can then decide where you’d want to go if you get a chance to come back again.

I’m not an adventurous traveler and if on my own, outside of large cities, I’d feel more comfortable with a tour group especially if I didn’t speak the language.  My friend and I did take Italian lessons the winter before so we managed to be able to communicate a bit though most people replied to us in English. I guess it was obvious!

Venice impressed me as a beautiful old city, faded and worn. not in the best repair, but it still has that grace and style about it. Obviously, My only visit to Venice was brief. I may get back there again someday. It would be nice to see more of it, visit some of the museums and get a better look at the things I only saw briefly. And see the Rialto Bridge!

3 thoughts on “Travel Journey of the Week: Venice”