Where’s My Backpack’s travel theme this week is “Connections”.  Anyone that travels makes connections, whether it be for transportation, or for the people you meet. You might make a spiritual connection to a location as well, a place in which you really feel at home. Connections can be made on an emotional level as well.

I met the man I’m currently engaged to in an online chat room for fans of Coronation Street, a British serial, the longest running on television today. He lives in Salford, UK which is in the Greater Manchester Area. We really made a connection over the airwaves and when we met up face to face, on July 12, 2004, it took a plane and a train connection to get there. I flew to London and a few days later, took a train (though I missed the first one because the signs at the platforms weren’t obvious as to which was the arrival from Manchester and which was the departure) to Piccadilly station. We met in the concourse. It really felt like time stood still. A cliche, yes, but that’s what it seemed like.

He still lives there and we travel back and forth, trading visits alternately. For me to fly to Manchester, I have to make a connection in London Heathrow most of the time though have had to route through Toronto once in awhile. That’s frustrating when you have to fly 2 hours backwards to go forwards, whether I fly past Halifax to come back or fly west to Toronto to fly east to London. It’s a connection we gladly do without if we can help it. We then usually travel somewhere onward, by car, train or plane.

Speaking of Coronation Street, in addition to a fiance,  I’ve made many, many wonderful connections with new friends who are fans of the show. We have fan gatherings, called “pings”, and if someone travels to your home town, often there is a ping organized so you can meet and chat with the local fans, many of whom you may know from the various boards and forums.  There have been international gatherings organized in Manchester, the home of Coronation Street, where fans/friends who connected via the internet have met up and enjoyed hanging out together and even been lucky enough to visit the television studio where the show is filmed. Good times! 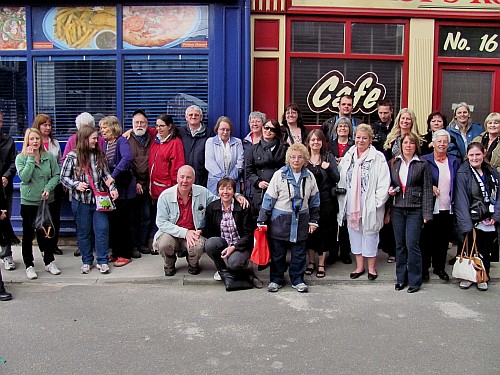 One thought on “Travel Theme: Connections”