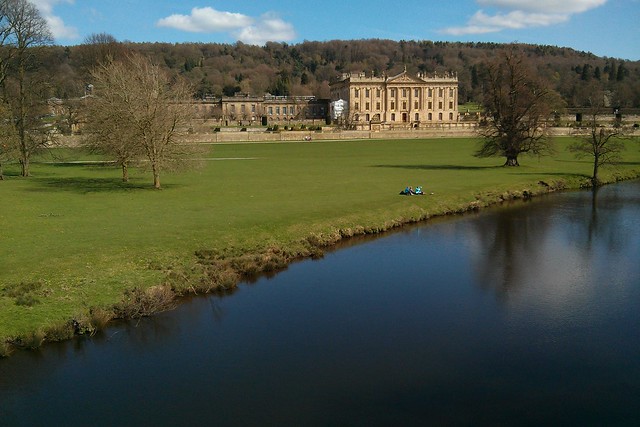 Following on my previous post as we head deeper into the Peak District National Park, we arrived at Chatsworth House, nestled against the River Derwent, about noon. They’re about 10 minutes or so from the town of Bakewell. Chatsworth is the seat of the Cavendish family, the Dukes of Devonshire. The current Duke is the 12th in the line. There’s quite a lot of history about the family and the house, both on Wikipedia and on the website for Chatsworth itself so I won’t go into it a whole lot.

The estate as a whole covers over 100 acres and there is actually quite a lot to visit if you were to spend the whole day here. You can walk around the extensive gardens and trails where you will see various out buildings, statues and fountains. You can visit their working farm and see some animals, mainly geared towards children. The old stables buildings have a restaurant and shops in them and there’s a little shuttle that will take you up the little hill to it if you want but it’s not far and not steep.

The house, of course, is the jewel in the crown. There are various prices for entry, depending on what you are going to see. The house alone without the farm or charity gift donation is 18 pounds for an adult which is not that expensive compared to other similar attractions. It’s 12 pounds to just visit the gardens and 6 to just visit the farmyard. They also let you take photos for your own use. 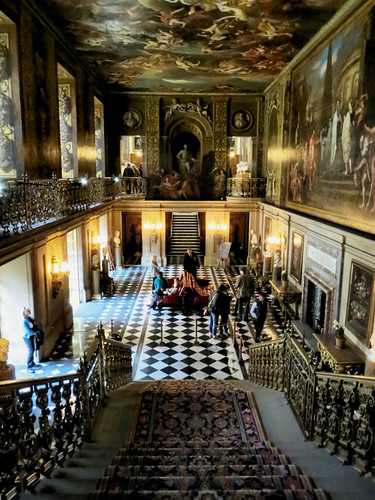 We arrived at midday, as I said, and the parking lot was very full so we had to park quite a bit away from the house. Never mind, we walked over to the house, passed through a pretty courtyard and entered to the ticket area. That done, we went up a few steps and turned into the Painted Hall, the very impressive entry area. It really is impressive, with every inch of the ceilings and much of the walls covered in murals and paintings. The floor is black and white checked tiles and the hall is ringed with antique furniture, sculpture and artifacts. You could probably spend a half hour just looking at everything there.

There’s a route you follow through the public rooms, about 25 or 30 out of a couple hundred, most of which are the private rooms for the family.

Another highlight on the ground floor is the elaborate chapel with a high white carved altar piece. The ceiling in here is painted as well. We come back around  to the Painted Hall then go up the big staircase to a landing, also with painted ceilings and also some more lovely statues and artwork. There are also come cases with old swords and pistols here. It’s a good vantage point for photos into the Painted Hall as well. Up some more stairs to the upper floor of the house. 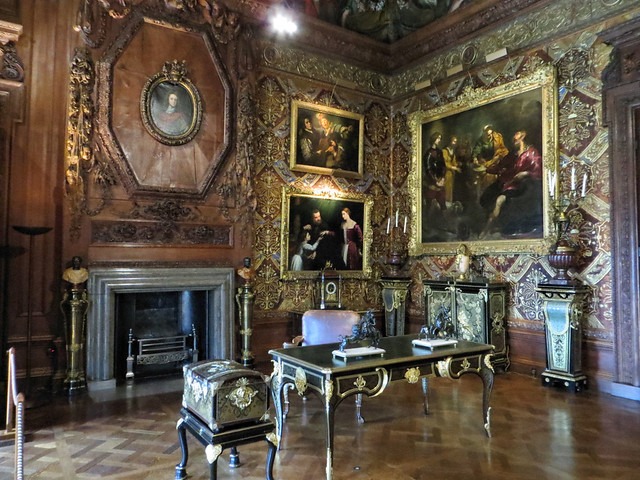 Here you have the state rooms, including an elaborate Baroque music room and a state bedroom with a tall canopied bed and walls lined with paintings. The music room is filled with silver and gold pieces and very fancy marble tables. At the very back, behind a slightly opened door, is another well known sight. It looks as if there’s a violin hanging on the wall behind the door, but in fact, it’s fake. It’s a tromp d’oeil painting. There are portraits of various members of the generations of Cavendishes scattered around the rooms and hallways and there’s another smaller room lined with Old Masters paintings and sketches including a large portrait painted by Rembrandt.

The house is filled with art and sculpture and antiques. There’s a model of the house in a glass case in the Oak Room, next to (I think) the chapel, so called because it’s lined in oak panelling and carving. Also in here, bracing the fireplace, are two long narwhal tusks which is one of the more unusual finds in the house. In one room there was a portrait of Henry VIII, which we didn’t expect! There’s so much to look at and the guides or curators in most of the rooms are really good. They know their stuff, about the family and the house and volunteer information if they see you curious about something and very willingly answer any questions you have. There are little information cards in most of the rooms but the guides are even better and filling in details.

Even the corridors are lined with things to look at or have good views out over the gardens and courtyards. There are some rooms you can’t go right into and can only look from the end or they are partly roped off, such as the bedrooms and the library which looks like it would be a fascinating place to delve into if you could get in there. I would imagine the priceless rare books make that impossible. The light in the library is also kept low but there are lamps lit on the tables. There’s an ante-library as well because one of the dukes, the 6th I believe, was such a book collector that he overflowed his library. There are apparently over 17,000 books. Just past the library and ante-library is the state dining room with it’s long table set with china, and lots and lots of silver!

The last room you go through on the route is the sculpture gallery and that leads to the inevitable gift shop, housed in what was the orangery. There used to be a huge glass conservatory in the gardens but that was torn down in the early 20th century as it was too difficult and costly to maintain. Another interesting fact was that the house was used as a girls’ school during World War II and there were several displays about that on as well. 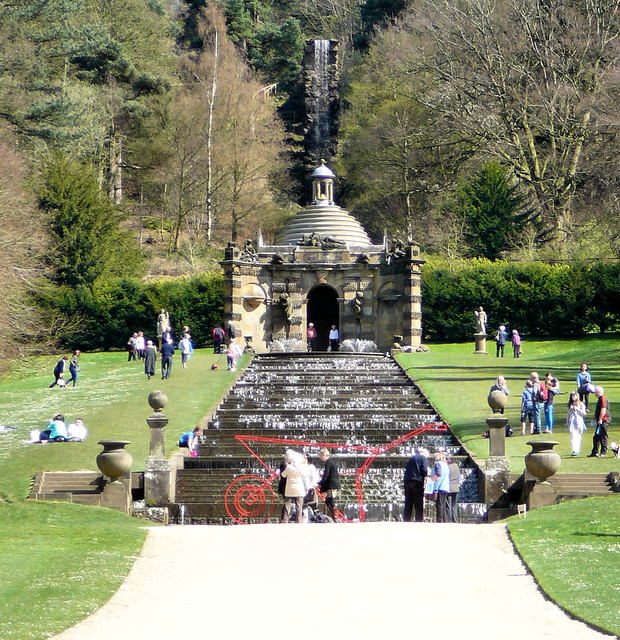 The cascade was built around 1700 as a series of steps where the water from fountains at the top would flow. The house was built in 1703.

We took well over an hour to walk through the house looking at everything and taking photos. After, we got a drink at an outdoor take out stand and sat in the sun for a rest. We didn’t feel up to traipsing around too much of the garden but walked down past the end of the house and up near the Cascade fountain to have a look. We decided not to go up to the Stables since we’d already had a cuppa and thought, as we were getting hungry, we might as well head off. We had a country pub to go to and a beautiful big late lunch to enjoy.

The Royal Oak is an award winning pub between Buxton and Bakewell and not too far from Chatsworth. They have some rooms and camping facilities and though are a little off the beaten track, it is well worth making the drive. The atmosphere is very friendly. There are several small rooms, with open fires and copper artifacts on the stone walls. They have a very good beer selection including a really tasty Bakewell best Bitter and a cloudy cider on tap called Rosie the Pig!

Their menu has lots to pick from and includes traditional pub grub and excellent up to day items as well. The special we were offered was guinea fowl with savoy cabbage and leek mashed potatoes with red wine gravy. Too tempting to pass up for me though G. decided on a mixed grill which came on a large platter filled with various types of meat and lovely homemade chips.  The food was hot and absolutely mouth watering. Well deserved for the awards they’ve won and I told them, too!

Full and satisfied, we finally headed back to Salford after a long and very enjoyable day.

There was an error retrieving images from Instagram. An attempt will be remade in a few minutes.