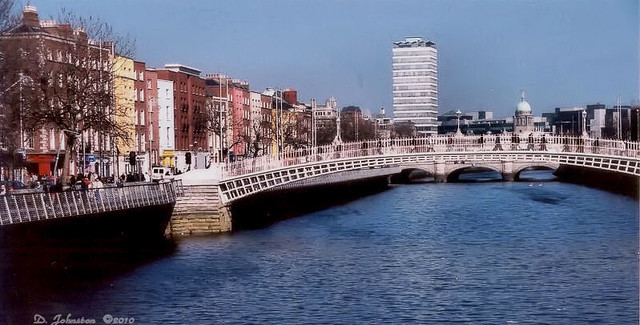 My nephew is currently touring around Ireland so in honour of that, a few stories from my visit to Dublin (in 2002!).

I arrived in Ireland, initially spending a few days in the town of Cobh, near Cork, to visit a friend. I stayed in a B&B on the waterfront overlooking Cork Harbour with a great morning view of the sun rising over the water. We took in the cathedral that had swastikas in the floor tiling (because originally, the swastika was a symbol of good luck, before Hitler adopted it and it became a symbol of hate). We also visited the Queenstown Experience which is a museum telling the story of Queenstown (which became Cobh, pronounced “Cove”). It told tales of the Irish famine and emmigration to the New World, and had lots of photos and artifacts from the Titanic which stopped off here as it’s last land point before heading to its fate.

There’s also a little island between Cobh and Cork called Fota Island which has a little wildlife park/zoo and a restored grand house (as well as a golf course and nice restaurant in the clubhouse!) We had a nice walk around there, too, looking at the animals and birds.

On to Dublin to a weekend of exploring and partying. I met up with 10 of my internet mates from various places in the UK and Ireland and we hung out in the hotel bar at night and checked out the city in the daytime. My friend from Canada had met up with us there as we were later to take a short bus tour around the Republic of Ireland. 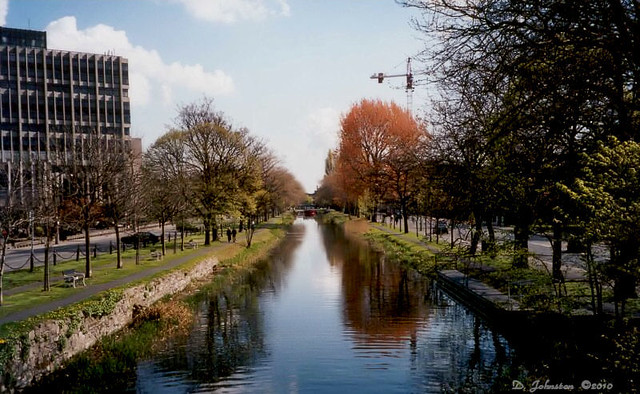 Dublin is a nice city, very historic and old and the city centre is compact and flat. Great for walking and getting around! We found a gourmet food market in a courtyard, somewhat hidden away from the bustle of Temple Bar, had a look in Christchurch Cathedral (no swastikas here!) and we found another funky market not too far from the hotel near Dublin Castle, too. We browsed the lovely shops on pedestrianized Grafton Street, walked along the riverfront, strolled through St. Stephen’s Green and sampled a bit of the night life. Our hotel had a late night residents’ bar that would stay open as long as we wanted to drink and after the pubs and clubs closed, musicians dropped in for an impromptu performance. What was even better, one of our group used to sing and joined in with one of them as she’d known him from her earlier days. I discovered that Guinness, freshly poured from a beer pump in the city where it is brewed is indeed a beautiful thing!

On one other night, after a late meal, a few of us decided to take a ride in one of the horse and buggies that cluster around the Green for tourists. The city was quiet, the clopping of the horse’s hooves echoed off the old stone buildings in the chilly early spring night and the driver kept us entertained and informed. He even dropped us off at the front of our hotel which wasn’t far from St. Stephen’s Green where we’d started from. It was kind of magical, really, and definitely unforgettable.

morning, a few of us discovered a flea market/estate sale just around the corner. We spent an hour or two digging through the treasures on the tables. I found a silver ring with a setting that looks like leaves holding a turquoise, black and red “stone” made of a hard clay substance called Fimo (or feemo?). I get remarks on it to this day because it is so different looking as you can see here.

We had a last lunch together before everyone scattered to go their various homes in various directions and my friend and I were about to embark on a bus tour around Ireland with a couple of days back in Dublin when that was done. The tour was really good, too, and we saw a lot of lovely countryside, did a lot of shopping and met some really nice people, as well. 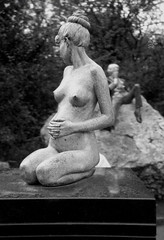 Back in Dublin, after the tour, we were staying in a different neighbourhood, not far from a canal. It was a pretty spot and still close to the city centre so it wasn’t far to go. We saw a lot of the posh Georgian houses and squares here, houses with some of the famed fancy doors. We browsed in the oldest bookstore in Dublin, Greene’s, which is over 200 years old. It is across from the house where Oscar Wilde used to live, now an American College, which is also near Merrion Square where, in the park in the square, a well known statue of Wilde languishes on a rock behind a statue of a pregnant woman, purported to be his mother. Merrion Square was laid out in 1762 and has some lovely red brick townhouses with those lovely Dublin doors.

In Greene’s, we also found some plastic laminated bookmarks that were decorated with individual Celtic alphabet letters as inspired by the Book of Kells, found in Trinity College. I had bought one at the bookshop in Trinity College after we’d seen the Book of Kells and my friend wanted a few for souvenirs but couldn’t find a “W” for her mother’s name. The young clerk said it was because there was no W in the Irish language. But, wasn’t the Book of Kells written in Latin? (it was) I thought so, and there is no J or K in Latin yet there were J and K bookmarks. Oh well, anyway, I commented wryly, you could get the M and tell her to use it upside down! *snicker* I crack myself up sometimes!

I’d mentioned we’d seen the Book of Kells. The bus tour ended with a tour around Dublin and a stop at Trinity College. The college was founded in the late 16th century by Elizabeth I as a Protestant centre of learning. Catholics were allowed to attend, technically, but the Catholic Church in Ireland forbade Catholics from attending university there until 1970 unless they had the Bishop’s permission. The Book of Kells is an old gospel illuminated by monks dating from about 800 AD. It really is a beautiful book and the illuminations are so detailed and bright even after all these centuries. Here’s a link to my post which has a link to an online viewable version of it.

We also took the light rail out to the end of Dublin’s bay where the town of Howth is. Howth is a pretty “seaside” town with the remains of an old abbey high on a hill overlooking the bay. There is an island in the bay called Ireland’s Eye. Howth used to be a fishing village but is now a residential suburb of Dublin though there are lots of remoter hills for hiking surrounding the town. 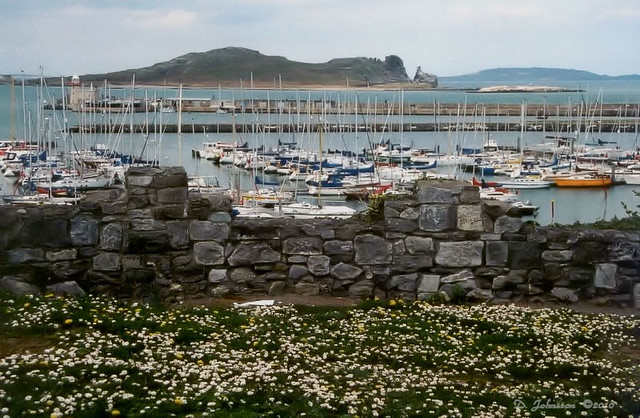 I’m sure there have been changes in Dublin since we were there 12 years ago but the city centre probably remains much the same. We didn’t get the chance to go into any of the museums or do any proper shopping, preferring to walk around the old city and soak up the atmosphere and there is plenty of that in Dublin!

One thought on “Dublin’s Fair City”