Sue at A Word in Your Ear pics out a random word each week for a photo challenge. This week’s is Raindrop. 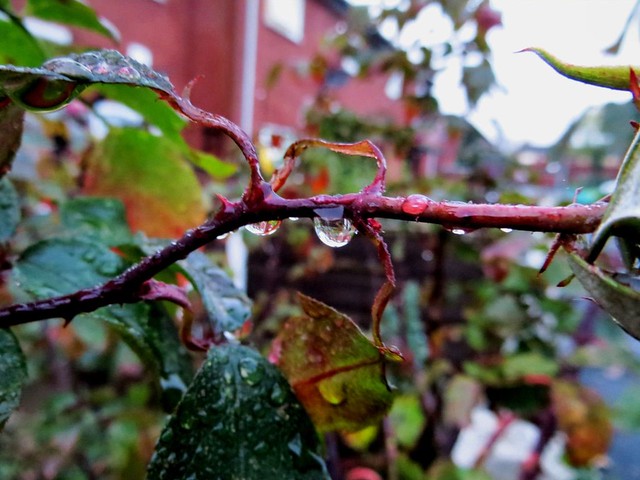 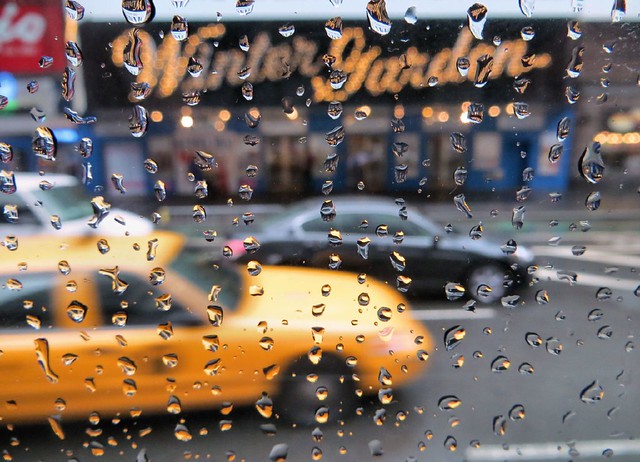 May rain in New York City

Continuing the Irish 2002 travelogue, onward to the next leg of our Irish tour:

Day two of our tour started with a the bus leaving a bit late and that continued to be the order of the day.  There was always at least one person that kept us waiting and invariably it was one of the group of  women traveling together from New York City. They were lovely people, most of them work together in a hospital as Anesthesiologists. And they were astonishing shoppers! That’s usually why they were late!

We drove west towards the Atlantic coast under again sunny skies. Really lucky there because the view of the 600 foot high Cliffs of Moher on Liscannon Bay would have been disappointing under cloudy or  foggy skies or even just that hazy type of sunny day you often get on the coast.

We were the first bus there, even before the visitor center was open so it wasn’t crowded at all. Another lucky break. The cliffs are a spectacular sight, with the rock formations carved by millennia of weather and water, thousands of sea birds drifting and perching on the ridges and caves and the cool, fresh breeze briskly whipping our hair as we wandered around the viewing platform or climbed the stairs to O’Brien’s Tower. Carole went to the top and said you could see the Aran Islands off the coast. I got half way up and stopped to talk to another one of our bus-mates who I found out was from teh same place we are. By the time we ended our conversation I decided against the rest of the climb and instead made my way back to the visitor center, open now, to get in ahead of the group for the ladies’ toilet.

From there we drove North west into the Burren, (pronounced Barren), which is a rocky limestone plateau with huge hills of exposed rock overlooking Galway Bay. Farming is nearly impossible here though there are some cattle dotting the lower hills. There are herds of feral goats and we even saw a few running up and down the side of a hill.

There are the inevitable stone fences crisscrossing the landscape, these made only by piling the stones with no kind of cement, water or sand to secure them. We stopped at the top of Corkscrew Hill, aptly named, for a photo shoot. What a view too! And the road down the hill turned around upon itself so sharply you thought you would see your own tail lights coming round the bends. I don’t know how, but Alex maneuvered that bus down it as easily, or so it seemed, as if he was driving a straight motorway.

The Burren, in County Clare, is a protected environmental and conservation area. In the summer there are a lot of wild flowers including 12 kinds of wild orchids. We drove through some wild and remote areas dotted with occasional villages including one, Lisdoonvarna, that is famous for matchmaking! Irish farmers are apparently notorious bachelors and between many of the local women leaving the area for education and jobs, and the farmers living at home where they have their mothers to tend to them, according to Bill anyway, they rely on matchmakers  quite often to find a wife when needs must! Lisdoonvarna has a matchmaking  festival every September for potential mates to meet up!

We drove down and around Galway Bay where there were more tower ruins and old antique boats moored on the low tidal muddy banks. The boats are small fishing boats with red sails called Galway Hookers. They have red sails but unfortunately the only one we saw was moored and didn’t have it’s sail up.  There’s excellent salmon fishing in this region and in fact it was a village known for salmon fishing called Claddagh where the famous Irish symbol was created. That’s the heart held by two hands and topped with a crown symbolizing love and loyalty. It’s very commonly used as a wedding band in Ireland.

Galway city was first settled by 14 French-Norman families, later referred to as the 14 Tribes of Galway. Some of the family names that you still see on businesses, streets and monuments are Joyce, Lynch and Burke. We drove around Galway City, and after a coffee break at a shop in Spiddal, headed up into the Connemara region, famous for it’s marble.  We are due to stop in a marble factory but to get there, we drove on a narrow road across some wild peat bogs. Peat is still cut and dried for fuel in stoves but more and more often it’s done on commercial farms.

The Connemara Marble factory and visitor centre is in a village called Moycullen. There is a display of all the deep colours of marble that has been quarried in the region over the years, black, shades of green and red. It’s some of the hardest marble in the world and was used for construction mainly. The quarries are nearly depleted and only the green is still obtainable in small quantities but the upsurge of using marble in gift ware and jewelry has given the quarries that remain new life. They also mind amethyst here. Naturally, there’s a shop and though I don’t often buy from the shops on these types of stops, they did have really nice things for reasonable prices so I did make a few purchases.

Back to Galway city for our lunch break. Oysters are famed here but we decided to walk down the pedestrian Shop street in search of first, a toilet, and second a takeaway sandwich.  We found a cafe a  and bought sandwiches and a drink and walked back to the spot where we were to meet the bus later, on the site of a park, to eat in the sunshine. The park was full of young people enjoying the warm weather. There’s a university in Galway and a lovely cathedral. I didn’t see that much of  the city but I got a very pleasing impression and it’s a place I’d like to spend a day or two exploring further.

Our afternoon stop was in the farmlands of the county at Rathbaun Farm which does agri-tourism as a way to boost their income. Many of the farms here in County Galway are livestock because the ground doesn’t really support crops. This farm contains a 150 year old thatched roof farmhouse with a tea room where they will serve you tea, coffee and scones after a little tour.

Finton Connolly was our host and talked to us about modern sheep farming. This farm makes its money from the sale of lamb mainly to France though they’ve also got cattle as well. We saw several breeds of sheep in a small barn, several of which had young lambs. The sheepdog, a border collie named Buff, was let loose in a paddock to worry 5 or 6 sheep around in clusters.

Contrary to the sheepdog we saw in Scotland, this dog was not trained with whistles. He brings the sheep to wherever his master is standing. The whistle trained dogs are for selling so it doesn’t matter what language you use, they will always understand the whistle signals.

It’s amazing to watch the dog duck her head down and give the sheep steady eye contact that seems to unnerve them to the point of huddling and clattering together en masse away from the dog in the direction she wants them to go.

Finton later sheared a struggling sheep, who was concerned for her lamb which was skipping around the barn being herded by the dog who was still out of her pen. The sheep was a shaggy one and by the time he was even half way done, it looked like he was handling a bag of rags, with only four skinny black legs waving about to give any hint that there was a living thing underneath it all.

We were encouraged to look through the older part of the house where there was a cozy peat fire burning in the hearth and we took lots of photos by the lovely old whitewashed cottage and in the garden outside. The thatch in most of Ireland is made of river reed.

We got back to Ennis about 5:00 p.m.. Carole wanted a rest so I shopped for postcards in the tourist information shop and walked down the High Street to the River Fergus where I had spied a few good spots from the bus to take pictures. There are ruins of an old friary there and a cathedral.

I also found a store that had lots of china and gifts and they took the tax off there and shipped it for you. They were open until 7 so I went back to give Carole the heads up and brought her back. She found lots of things she wanted and although I wasn’t planning to get anything, I found a Waterford Crystal thatch cottage that’s about 4 or 5 inches long and 2 or 3 high. It’s exquisite and I had to have it. Since I bought that, I figured I might as well get that Royal Tara china cup I had spied and a Stephen Pearce bowl.

We had it all shipped together but that meant it had to be paid for together. What a time we had! Her visa card needed authorization and then the clerks couldn’t get the cash register to accept the manual authorization nor could they get it to reverse the transaction when we finally suggested we’d pay cash. They had to call two other people to solve the problem and we were there about 20 minutes! The women that were serving us were unfailingly and amazingly polite and patient when I knew they must have been frustrated with their computer beyond belief! They suggested a restaurant when we asked but when we found it, it was closed, Tuesday being one of it’s days to shut early. Oh well. We ended up back at the bar in the hotel instead but really enjoyed our meal there.

The Ring of Kerry drive is tomorrow. Hope the weather holds because it’s supposed to cloud over later in the day.

Day three of the tour will be posted soon.

Day 4 of the tour

Day 5 of the tour

Day 6 of the tour