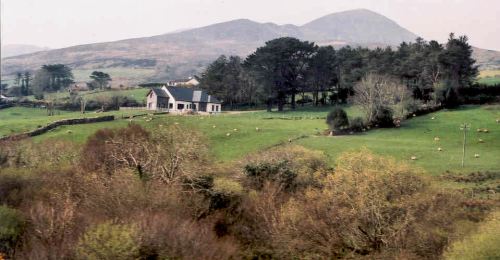 Landscape along the Ring of Kerry, Ireland

We’re off around the Ring of Kerry on day three of our Irish tour:

Weather looked like it could go either way. It was a bit gloomy this morning and all day it was a hazy day with high cloud cover and the sun breaking through now and then. It was a pity for the views around the Ring of Kerry but it wasn’t too bad. It did clear up from how it started this morning.

We caught the 9 a.m. car ferry across the Shannon river estuary. We drove into North County Kerry where the landscape was flat and boggy and uninspiring. Or perhaps it was the weather.  The western part of the Kerry Mountains is called the McGillicuddy Reeks and we drove up into the beginning of the range on the way to our first stop, Tralee. We will be staying in Tralee tonight. We were due to go to the Kerry County museum complete with a medieval sight, sound and smell effects only the staff are on strike starting… yep.. today!

We were taken to a local windmill instead in Blennerville. Which wasn’t working due to some maintenance problems. They had a video presentation on the restoration and had an emigration exhibition and we were invited to examine the inside of the windmill. The windmill was built in 1780 and fell out of use in 1850. It was restored in the 1980’s as a youth project. It is now the only working windmill in Ireland and still mills flour but just for demonstrations. It’s only used for cattle feed, not pure enough to sell for human consumption.

We were on a time constraint and I wasn’t overly interested so I took a few photos outside before we left. Pressed for time seemed to be the order of the day as it went on, we ended up being rushed every time we got off the bus! Lunch break was only 40 minutes!

Into the mountains and through a little town called Killorglin. This town has a 400+ year old  Puck Festival every summer that celebrates the goats of Kerry. There’s even a statue of a wild horned goat with a crown on his head in the town center that we drove past. They bring a wild billy goat down from the hills and crown him to preside over the weekend’s festivities.

Why? Two theories according to Bill. One was that a herd of goats warned the town of an impending dawn raid by Oliver Cromwell’s men who were camped outside the town and the other has the goat revered as a holy animal by pagans. 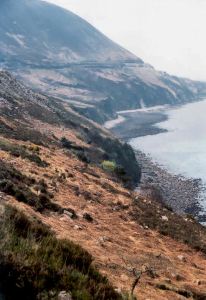 We entered the Ring of Kerry trail that starts at Dingle Bay and weaves its way along the sandstone mountains, sometimes along the bays and sometimes inland a bit around the Iveragh Peninsula. The views reminded me sometimes of the Scottish Highlands. We had a photo stop over Dingle Bay and had lunch at one little bar about half way around at Ballinskellieg Bay. The narrow road was originally built for the military in the mid 17th C. I did notice, looking straight down over the edge of one stop, a lot of litter. Too bad people can’t respect these places.

The sun was out at our lunch stop but was gone again when we continued. We had another break stop near the end of the trail and then started down the mountains and into the Killarney National Park, a large natural area of lakes and forest that was donated to the government by an Irish American. We stopped at a lovely lookoff over the Killarney Lakes called “Ladies’ View” named in honour of Queen Victoria’s ladies in waiting.

We were offered the chance to have a Jaunting Car ride in Killarney. This is a buggy that seats 6 in it and is horse drawn. Most people decided it would be fun since it looked as if the sun was emerging and it was a change from the bus. The ride would take us around a part of the National park. Before we loaded in the cart, the group photo was taken and the photographer also took photos of each group in the carts. I didn’t buy the group photo but I did get one of us in the cart!

We rode along the street  to get to the park entrance. There was lots of trees, fresh air, birdsong. The driver, I think they’re called “Jarvies”, would point out things of interest and crack jokes and stop so we could take photos. It took over an hour to get to our meeting spot back in the town and we really found it a relaxing hour.

The Brandon Hotel  in Tralee was very, very nice. The rooms are lovely and the bed is soft. Dinner was very good too and we sat at large tables of about 8 which was also nice until the conversation turned to the politics of the Middle East. I didn’t have much to add and Carole was feeling a bit under the weather so we politely excused ourselves.

The Ring of Kerry was very scenic though we had hoped for a bit better weather. I’ve heard the Dingle Peninsula is equally spectacular but I think the road is not suitable for the tour busses. We took a lot of photos out the window and at our stops. We didn’t see much of Killarney which seems to focus mainly on the tourism industry which is so important to the economy of Ireland. We could have done without the windmill visit which would have given us a bit more time at our stops but that’s the nature of tours sometimes.