Our last day on the bus. The rain avoided us yesterday, but it’s still clear and sunny out this morning. Breakfast wasn’t great. No choice. They slapped down a plate of egg, bacon, etc., were late with the toast and it felt very like a conveyer belt to us. No matter. Let’s get going.

We drove through the old part of Waterford past Reginald’s Tower, which was built originally by the Vikings. The city center of Waterford looks very much like most Irish cities architecturally. We had our tour assessments to fill out while we drove and luckily the roads were fairly good for writing.

We headed out into the country county roads of County Wexford, past lots of yellow gorse brush streaking the green hills. We heard about rebellion in 1798 led by Father Murphy, an insurrection by the Catholics trying to gain rights inspired by the French Revolution 20 years before that. Didn’t work. The rebellion was brutally put down by the British.

Our first stop today is Avoca, in the Avoca Vale, a pretty valley about 2 hours drive from Waterford. The reason for the stop is a demonstration at one of the oldest hand weaving mills still functioning in Ireland. Avoca is also famed as the location of exterior filming for the tv series Ballykissangel and when Carole heard that her eyes lit up! She loves that show! I think I’ve only seen it once but as weaving didn’t particularly interest me either, we decided to spend our time in the village.

We ascertained our departure time then trotted up and over the dip in the road into the town. First the church. The actual name of it is Saints Patrick and Mary. It’s a very pretty stone church and chapter house with a little yard, stone wall and wrought iron fence. There’s a lovely gothic peaked door as well.

Down the road a little further there are a few small shops along  side a row of two storey houses painted yellows and oranges and pinks. I still haven’t been able to take a photo of the single storey cottage rows that we’ve seen in a lot of villages and towns. The bus drives by too quickly and too close to the side of the street to take a photo from the bus and nowhere we’ve stopped has had them. This will have to do.

And there’s the pub! Fitzgerald’s is where a lot of the action in the show takes place. There were very few people around since most of our group stayed at the mill and it was earlyish. We each posed for a photo on the benches in front of the bright yellow and blue pub since it wasn’t yet open, and walked down by the river to see the stone bridge. We looked in a  couple of souvenir shops as well.

On the way back we passed one building that had a sign on it that proclaimed, in spite of it’s relatively small size, that it was not only the law courts, but also the computer learning center, library, AND the tourist information center! Necessity etc. A final photo of the church from the village point of view, and back to the mill complex of low white and red buildings on the river.

The clouds began to gather and we drove under darkening skies through the north part of County Wicklow where the mossy-trunked trees were tall and close to the road, their overhanging branches forming a canopy over the road. Or it would have if the leaves had been in full bloom. Probably looks really pretty in summer with the sun streaming through but the skies were darkening.

We drove through a town called Rathdrum where a man called Charles Stuart Parnell was born. He was a Protestant MP who campaigned for Ireland to become independent from Britain and he pushed for rights for Catholics.  It’s said that he probably would have succeeded and Ireland would have gained its independence as a complete and undivided country, avoiding all the violence of the 20th C. except for one thing. He fell in love with the wife of another MP, one Mrs. Kitty O’Shea. The scandal ruined him and he had to resign in disgrace. He’s still honoured in Ireland with squares, parks and streets named for him. The only man with more accolades seems to be Daniel O’Connell one of the leaders of the 1916-1920 rebellion that did lead to an independent Ireland, albeit without the northernmost 7 counties. 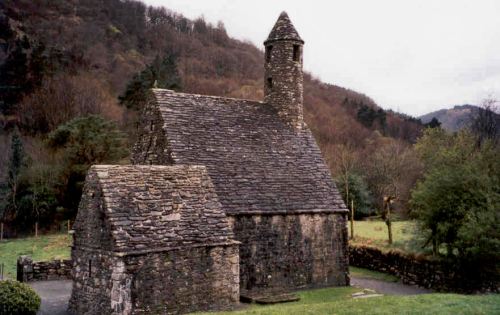 Rain spit on the bus windows as we arrived at the Glendalough visitor center. Glendalough, which means the  Valley of the lakes, was the site of a monastery founded by St. Kevin nearly 1400 years ago. It was used for quite a few centuries before it fell into disuse and ruin. There are roofless buildings and a round tower and the remains of a kitchen building along side the monks’ cemetery.

We saw a short video in a room that I found very cold and drafty and by the time our walking tour was to start, the rain was coming down lightly but steadily. I had neither hood nor umbrella so I decided to skip it. I was chilly already and getting wet wouldn’t help. I looked around the visitor center and made my way across the car park to the hotel in the village where we were going to have our lunch break A few people from the tour had already gone straight there. Had I known I would have joined them earlier. There was a gas fire burning and, luckily, an empty table right beside it. Bliss!

Lunch, hot tea and a hot apple crumble with custard for desert which I was just getting ready to eat when the rest of the group returned. Carole joined me and ordered her lunch while I toasted myself on the fire and my tongue on the hot custard and heard about the walking tour which did sound quite interesting. She found a beautiful Celtic cross in the cemetery that she got a good photo of too!

We’ll soon be back to Dublin and a day or two on our own to explore further.