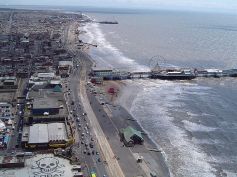 view from the Blackpool Tower 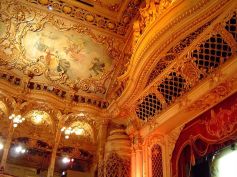 Ceiling in the ballroom of the Blackpool Tower 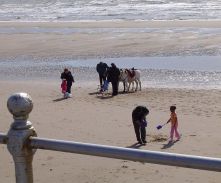 Donkey rides on the Blackpool beaches 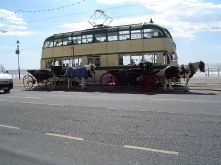 Blackpool is a seaside town in the northwest of England. It has been a firm and traditional summer holiday destination for well over a century. It has all the seaside traditions – sand, donkey rides, arcades, piers (three!) with attractions and there’s lots of shops and places to have fish and chips along the seafront. There are streets upon streets of small hotels, guest houses and B&Bs. There are Bingo Halls, theatres, exhibitions (some tacky, some not) and there’s a huge theme park filled with rides and games called the Pleasure Beach. They even have the Blackpool tower, a mini-Eiffel like structure on the seafront that has a grand ballroom in it and an observation deck high in the sky.

My husband spent many a happy holiday there as a child. They took the bus, or “charabanc”, “chara” for short. They did all the things families do. There were many great memories. He’ll be emmigrating to Canada and wants to see Blackpool one last time so we’ll jump in the rental car and drive up from Salford, just about an hour’s ride away by car.

I’ll confess. Blackpool has always felt a bit tacky to me, a tourist trap, but I’m not British and these seaside wonders are not ingrained into my psyche.  Also, I grew up in a city by the sea so the ocean isn’t as much of a novelty. We did go once before, for an afternoon and we went up in the Tower, found a Doctor Who exhibit and had a walk along the seafront for a bit.

In September, I think the weather will be a bit warmer than it was on the day in the month of May when we went last time. Maybe a paddle in the sea while walking on the beach might be something we’ll do. I think I’d like to walk out along one of the piers, perhaps take the tram to the Pleasure Beach (though you won’t get me on those enormous roller coasters for love or money) and see what other interesting or dubious things to do away from the sea front streets.

One thing I do want to see is the Illuminations. The Blackpool Front (the seafront) and streets are lit up with neon decor, some of it very artful, from the beginning of September through early November so whatever day we decide to go, I want to stay late enough to see the lights turned on. There are indoor illuminations too, at Illuminasia in the Winter Garden.

Other possibilities, if we have the time include a peek into the Winter Garden Opera House, and the Grand Theatre, two wonderful old Victorian theatres.  There’s the World Fireworks Championships on several dates in September, that would be pretty amazing, I would think. We shall see what we have the energy to do! I anticipate plenty of rests with cups of tea/coffee, maybe a fish and chip meal and a sit down to watch the sea.