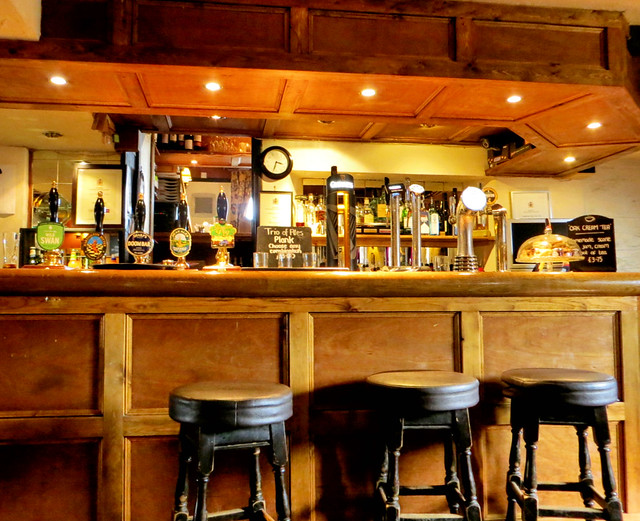 The WordPress weekly challenge asks us to show something creepy.

The first time I traveled somewhere that affected me was the battlefield of Cullodden in Scotland. I passed through the visitor centre and out on to the area where the great battle between the Highland Scots and the English armies clashed on April 16, 1746. The Scottish were decimated. Many were buried on the fields in mass graves by clans. You can still see the risings in the earth and clan markers for some of them. There’s also a spot called the Well of the Dead, a spring in the earth where a particularly fierce charge through the English line of defence ended with the death of Alexander MacGillivray on this spot. This is a marker to his bravery. While walking around through the paths and looking out on the area, though it likely looks far different now than it did back then, and there’s a road cutting right through the middle of it, you can still feel something, maybe the spirits of the dead, maybe lingering cries of the dying as the wind whispers through the trees. 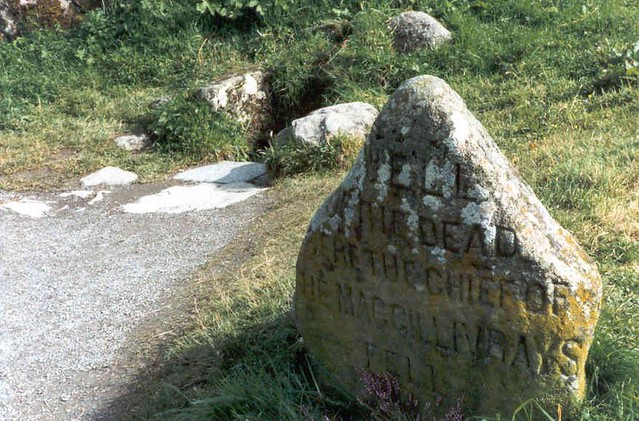 The Well of the Dead. Culloden, Scotland

Another recent creepy thing that we saw was this death mask in the Tower of London, something that an executioner wore. 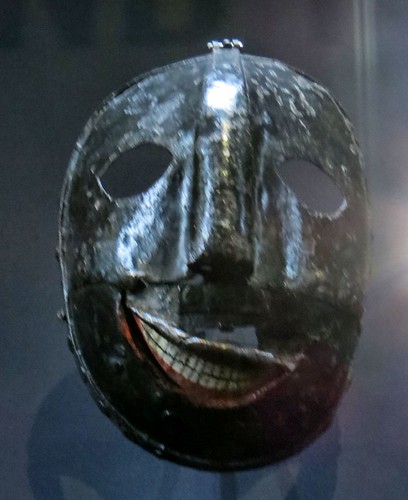 It’s not often I’ll blog about a specific website but every now and then I come across one that’s really good and has a lot of useful information for travelers.

map happy is a travel website that’s full of interesting and useful information. It seems to be run by three women (there are three mentioned on the “About” page) but they have a lot of contributors. The site is one where you can spend a lot of time getting lost while browsing the many interesting and informative articles. It’s all good information, tips and tricks, gadgets, and general tech geekery. They aren’t selling anything, either. Also, I think it’s American based so some of the tips are geared towards Americans traveling but for the most part, anyone will find a lot of useful and interesting reading there.

The range of the topics is quite broad, varying from practical advice on passports, public transportation, hotels, rental cars to the mundane but entirely useful like how long a travel sized shampoo bottle might last you, how to say basic numbers in a half dozen or so languages, or how to get Amazon packages delivered while traveling.

You can create a login but that’s really only necessary if you’re going to want to comment on articles. You can read and browse all through the site for free. Note, I don’t work for them and I don’t write for them, and I gain nothing by plugging them, either. I have just spent about an hour happily clicking from one article to another when I should be doing other stuff!

Skies are often grey and foggy when we travel, but also here at home where Halifax often has fog rolling in from the Atlantic. 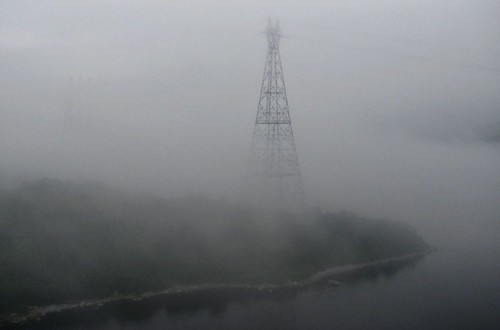 Foggy view of Halifax Harbour from the MacKay bridge

Aside from the often grey-skies we seem to encounter when I travel, the other “grey” that seems to stand out is sculpture and statues. 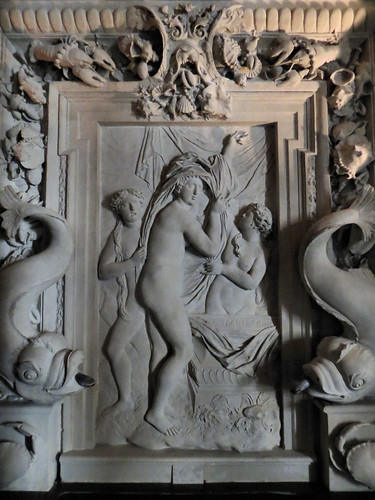 And finally, one of my favourite things, classic cars. This collection of grey/silver ones are classic British cars. 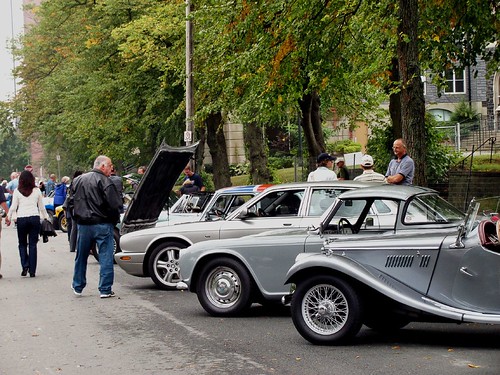 This week, the Daily Post challenge is “Beneath your feet“.

It’s a long way down from the lookout on the CN Tower in Toronto. It was the tallest structure in the world before the towers in Dubai opened. The views are great, and they have the glass floor that is a bit freaky to walk on. My instinct is to tip toe across the glass but of course that isn’t going to make you any lighter. Your head knows the glass will hold but your body thinks, Uh uh! 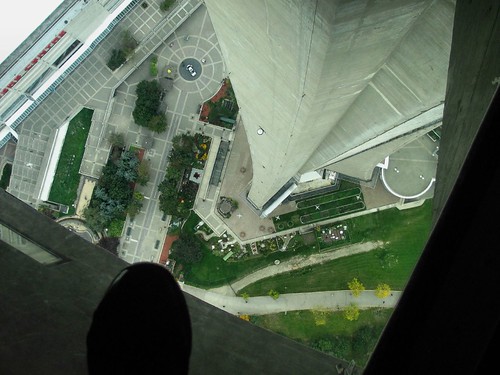 Through the glass floor at the CN Tower, Toronto

Traveling through the Movies is an series of occasional posts wherein I talk about movies that I’ve seen with wonderful location shots, scenery that makes you want to travel to that location.

This latest movie is a bit different than the usual travel type movie. This one will take you to Paris but a Paris that is idealized, stylized and animated. Yep. A Monster in Paris is an animated movie.

The movie takes place in Paris 1910. A young film projectionist, Emile, and an arrogant inventor, Raoul, cause havoc in the laboratory of an absent scientist and a seven foot monster is created as a result. The monster, which turns out to be a giant flea, falls in love with a lovely young chanteuse, Lucille, who sings in the “Oiseau Rare” (The Rare Bird). 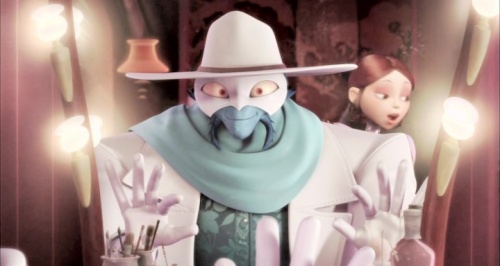 The “monster” is sympathetic. He didn’t ask for what happened to him and hates that everyone is afraid of him. Lucille takes pity on him and befriends him, helps to disguise him into an almost-pseudo Phantom of the Opera like get up so her friends can save him from the murderous Commissioner. There’s an underlying love story, too. Raoul and Lucille, who bicker and seem to be at odds are pretty much ensure that they will end up together. Emile and Maude who works near his cinema house are shyly awkward but you know they’ll find a way to work it out as well. It’s a bit of a mystery how the 7 foot tall flea turns out to be a guitar virtuoso and composer who also has an excellent singing voice and the ability to perform a very pretty two step, and some of the story is a bit far fetched even for an animated film but it’s fun to watch anyway. 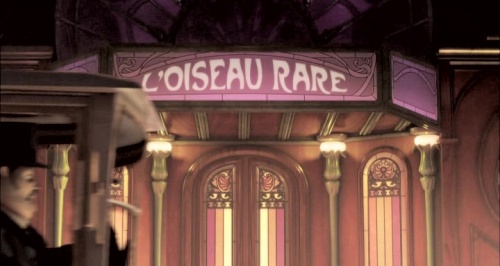 It’s a good romp through the streets and skies of Paris. The artwork that creates the Paris of 1910 is exquisite. It’s delicate, misty, filled with little details. It looks like a storybook. 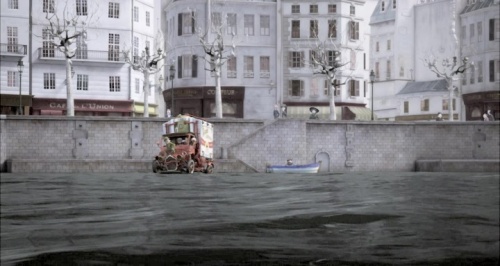