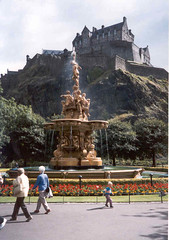 Edinburgh Castle from the Castle Gardens below

National Geographic Traveler, issue 32:8 (December 2015/January 2016) has a feature on top 20 “Must See” destinations. One of them is a short piece on Glasgow, the second city of Scotland. The author of the piece, Kimberly Lovato, opens with “If Edinburgh is the blue-blooded aunt at Scotland’s tea party, then Glasgow, just 45 miles to the west, is the T-shirt-clad cousin kicking over the kettle on the way out.”

That made me chuckle but it’s pretty close to the truth when embodying the spirit and personality of the two cities. I’ve been to both, not for lengthy visits but several times each over the years though my last visit to Glasgow was in 2003 and Edinburgh in 2000. I’m overdue. That aside, though I like both cities, my overall feeling was that I preferred Glasgow.

Edinburgh is beautiful, with a newer section of tidy Georgian architecture nestled at the feet of the volcanic ridge that housed the older city, crested with a jaw dropping castle on the top of the cliffs. The old part of the city is now mainly hotels and tourist attractions, with the university and student population thrown in. The Royal Mile stretches from the castle at one end to Holyrood Palace and the remains of the abbey at the other and it is quite interesting to explore with mysterious narrow “wynds” or lanes, small museums, a cathedral and lots of places to have a drink or a meal.The new Georgian section has great shopping, parks, bigger museums and galleries and also lots of edibles and potables.  It’s also the seat of the government both historically when it was the seat of Kings and in modern days, the home of the new Scottish Parliament. You’d find a lot to hold your interest within the inner city of Edinburgh.

Glasgow was the largest sea port in Britain and was a huge transatlantic trade hub.  The Industrial Revolution expanded the wealth in the area and it was a more important city than Edinburgh as far as finance goes.  There are two universities and a cathedral and a reknowned art college.  An industrial city means there’s a lot of working class folk in addition to the student population. All of this booming industry generally ends up faltering and that’s what happened to Glasgow in the 1960s but by the end of the 1980s, things were looking up again and today, Glasgow is a vibrant city again, with a thriving arts scene. It’s not really lost that working class atmosphere, I think.

For me, Glasgow feels more “down to earth” and everyday, where the city as a whole is striving to put their best foot forward and bloody proud of their achievements, something that it feels like Edinburgh takes as it’s due. Edinburgh feels more “touristy” in the city centre than Glasgow, maybe because Glasgow’s tourist attractions are a bit more spread out between the city centre and the newer west end. Glasgow certainly has great museums,  theatres,  shopping, eateries, pubs and clubs, and a cathedral of it’s own.

In fact, on that last point, the old cathedral in Glasgow is one of my all time favourites of the ones I’ve seen and even nicer than the one in Edinburgh, it’s far more atmospheric though it’s not very large. Rising on a hill behind it is a Victorian  Necropolis Cemetery with wonderfully interesting memorials. Also very atmospheric to trod around on a foggy, overcast afternoon like I did. 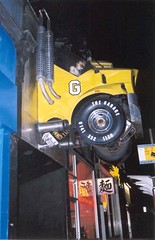 The main thrust of the National Geographic Traveler piece spoke about 2016 being a Year of Innovation, Architecture and Design so there will be a lot going on there this year and the writer also enthused about the music scene in Glasgow. From the street performers to the club scene to the concert halls, it seems there’s something for everyone. One of my favourite memories of Glasgow was a gig in a club on Sauchiehall Street, The Garage. It was an impromptu night out and the band was 3 Colours Red, a punk band from the late 90s and early 00s and they were fantastic!

Some do say that the local Scottish accent is nearly untranslateable and it’s true that a strong accent here is tough for our North American ears but for the most part, we didn’t have a problem. We found the people working in the shops and cafes to be very friendly, with a great, albeit cheeky, sense of humour. Anyone that I deal with in a shop, hotel, pub or anywhere else who greets me with a smile and a little joke has my vote. I haven’t encountered that in Edinburgh where I’ve found the people polite, perhaps a bit more business-like but by no means rude. They don’t seem as glad to see you as Glaswegians do, however. Perhaps that’s due to the higher tourist count in Edinburgh, I don’t know. They get on with things because there’s usually someone waiting in the queue behind you or at the next table.

Glasgow has it’s share of tourists, too but Edinburgh seems to get more of the glory. It’s not that it isn’t a nice city to visit. I think everyone should enjoy what Edinburgh has to offer which is a lot. Edinburgh Castle really is interesting and worth the money you’ll pay to see it, plus the views over the city from the ramparts are boggling. The majesty of the Edinburgh Tattoo is something you’ll never forget (along with the heaving crowds of the Edinburgh Festival! But there *will* be great theatre, too!) Edinburgh perhaps has the more glamourous history to show off but Glasgow has lots of that, too.

I really want to see both cities one more time and I think if we manage to get there, we’ll probably have our base in Glasgow. You can take the train between the city centres in under an hour making for a great day trip.

One thought on “Edinburgh vs Glasgow”