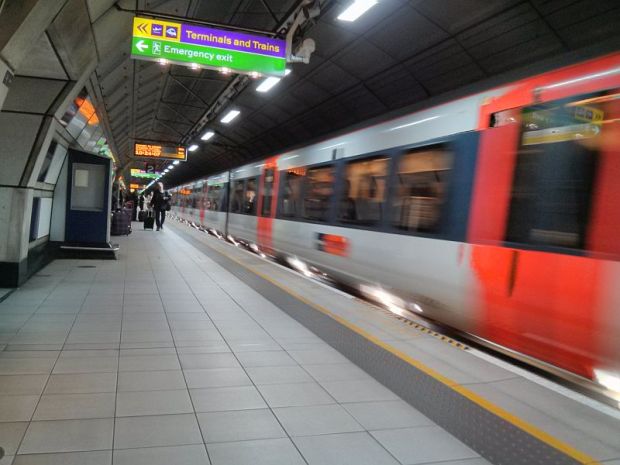 I’ve been in the UK nearly a week but it’s been a bit hectic and I haven’t had a chance to catch up. Mostly, we’ve been packing up G.’s flat or designating what’s rubbish so we haven’t done any touristy things or day trips. I did think I’d blog about the arrival process this time around because it was a bit different from my usual arrival routine.

Normally, I change terminals to connect to a domestic flight from Heathrow to Manchester. This time, when I made my travel arrangements, I though G. would be working and didn’t fancy sitting and waiting in an airport for a few hours until he got off work. I decided to take the scenic route instead. I made my flight plans and then booked a train ticket from Euston station to Manchester, to arrive about the time he’d get off work. A few weeks later, he informed me he’d be finishing work the week before so he would have been off but it was too late. Never mind, it would give him the day to continue to work on clearing things out.

So. The overnight flight  was pretty comfortable since it wasn’t full. I had the whole center set of 3 seats to myself. I sat in the middle because the passenger ahead of my original seat promptly reclined the seat which, though I understand because it’s more comfortable, I still find annoying. I enjoyed not having to change terminals, either because that’s often such a zoo, crowds and queues. Even so, though we arrived at Terminal 2  a bit early, it was a very long walk to get from the gate to the customs and immigration area, longer that it used to take when Air Canada used Terminal 3 and even that wasn’t always a short walk, though it could be depending on where the arrival gate was.

There weren’t many people in the line up, that’s always nice when you’re been awake for nearly 24 hours (I was up at 6 a.m. and didn’t sleep on the plane more than dozing once or twice) I got a bit of a third degree grilling from the border guard. I am always honest and I told him I was coming in to take my husband home to Canada. He wanted to know why I didn’t move to the UK. Cheeky. One thing I do notice, if you start to go into a lot of extra detail, they soon lose interest! I only had carryon baggage so I was off to the underground train to get into the city. I have an UK sim card and found a place to top that up on the way. I was surprised the sim card hadn’t expired because it was a little over 6 months since I last topped up or used it. Win win.

Rather than taking the Heathrow Express into Paddington Station which will cost £22 if you buy the ticket on the day though you can get better deals booking two weeks or 90 days in advance. It takes 15 minutes but there’s an alternative called the Heathrow Connect.That’s a £10 fare in to Paddington, running every 30 minutes as opposed to the Express 15 minute frequency and it takes 30 minutes to get there because it stops 4 or 5 times. I wasn’t in a rush so I got a ticket at the kiosk for the Connect. I just missed one train so I had to wait a half hour but got there eventually, and took a taxi to Euston Station. That cost a bit more than I expected but it is a bit of a distance and midday traffic in London isn’t going to make for a brisk journey, either.

Now I’ve got a couple of hours to kill but as I have a first class ticket, I thought the first class lounge would be nice, relaxing and quiet. Not expecially, it was nearly filled with people, but at least there were places to sit down and free tea, coffee, snacks and drinks.

Time to head to the platform. I waited, standing with the crowds in the main station area for about 15 minutes until the platform was shown. At the gate through, where you feed in your ticket, I am absolutely positive I spotted an actor from my favourite tv soap, Coronation Street, going through beside me. She’s Helen Worth who plays Gail Platt/McIntyre/Rodwell (and a few other last names over the years). Sadly, she didn’t get on my car. The journey was comfortable with a free light lunch and hot tea to keep my caffeine levels up. No booze for me. I’d be under the table!

It’s a dull, overcast day. It always seems to be whenever I arrive here. I’ve been here 6 days and I think we’ve only seen the sun very briefly a couple of times. Over the time here, we’ve done a lot of packing and putting stuff in bags. We did make time to visit with friends, seeing three different groups yesterday including a lovely long lunch at a pub in a town called Knutsford. Last minute packing today, checking around for smaller things and tomorrow the removal company comes and the shipping company comes. There are last minute errands to do and we’ll check into a hotel overnight, drop the keys off on Wednesday morning and head to the old city of Ipswich.