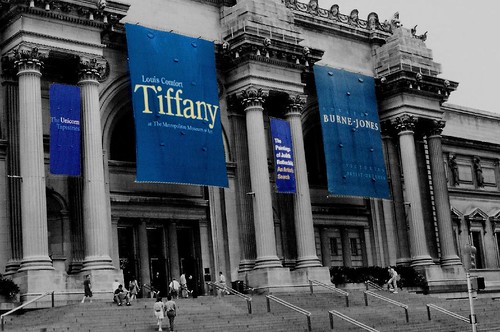 In the summer of 1998, I had been sent away several times for training courses. One of the destinations was just outside of Boston so I had the opportunity to spend a little time there. The next course was in Parisppany, New Jersey which isn’t all that inspiring but it was possible to catch a bus into New York. It was a journey of about an hour to Port Authority bus terminal. One evening, three or four of us made the trip in and went up the Empire State Building to see the lights of the city come on at twilight. We walked back to Times Square and were wowed by the lights!

At the end of the week, my flight home was not leaving until Sunday so I had all day Saturday to spend. It was early August and stinking hot and humid. I took the bus into the city again and rather than taking a tour or something, my plan of attack was to see several exhibits at the Metropolitan Museum. As you can see from the photo, one of them was about Tiffany and another about the pre-Raphaelites. I also had the chance to see the Unicorn Tapestries that were on show while the uptown branch of the Met, The Cloisters was being renovated.

The thing that really stands out in my memory about the museum, however, was getting to see Monets and Renoirs that they had.  I’m trying to remember if the National Gallery in London had any when I was there in 1993. I do remember seeing Turners and Canalettos there. In my memory, it was the first time I’d seen something by Monet and Renoir, though, so I’ll stick with that. They were stunning, as you might expect!

The Met is enormous, though, and you won’t see it all in one go. I saw what I went to see, the Impressionist galleries and the special exhibits and then took a cab down Fifth Ave. where I was meeting an internet pal that I traded postcards with. He and his wife and I had a quick lunch and when she went back to work (Sak’s Fifth Avenue!), he and I walked around that area, from Fifth Ave. over to Times Square. I picked up some souvenirs, took some photos and just soaked in the atmosphere of Summer in the City.

Eventually, he had to leave and I was hot, sweaty and very footsore. The heat and humidity were really dragging me down by this time so I completely failed to stay in the city and have my evening meal there, I took the bus back to the hotel where I had room service after soaking my feet in the hot tub! You’ve got to know your limitations!

That was my first nibble at the Big Apple. Graham and I went there for a few days in 2013 and did all of the touristy things and saw a show. We’d love to go back again and take our time, walk, go to museums and galleries, take in a show or two, eat fabulous food and shop until we drop!