In a departure from my usual travel related topics, this post is about pride, in more definitions than one.

He dressed casually, not in a suit, he allowed himself to be doused with water pistol ammunition. And a young man who marched with him  in his group turned out to be a short, gay HIV+ Syrian refugee whose life has probably been saved by immigrating here, considering he had more stacked against him in his former country than just politics.

I am proud to live in a country that took on some of the refugees. I am proud that my Prime Minister even went to the airport late at night to greet the first families that arrived and invited at least one refugee who was gay to march in his entourage in the parade. I’m proud that the PM did march in the parade and celebrated with everyone.

Halifax has a fun Pride parade later in the month, in a couple of weeks and I will probably go unless it’s teeming down. In anticipation of Pride Week here, several main intersections downtown and one in Dartmouth have had rainbow panels painted on them. Awesome!

I know that there’s still a lot of negativity towards LGBTQ folks and they are often still targets for violence, even here in Canada and I’m not proud about that but I think,… I hope, little by little it’s changing for the better. 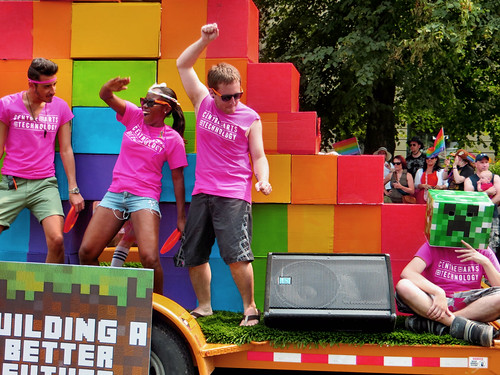 Be proud of who you are.

And should you wish to travel to Halifax for the Pride festival, which runs from June 13 – 24 this summer, Check out the website for all of the events happening locally.  In addition to the Parade on the 23rd, there’s the fan favourite Dykes and Divas softball match, a theatre festival, drag shows, a drag queen Bingo night, family barbeques and picnics, concerts, lectures,  a Lip Sync battle, and a lot more.

There was an error retrieving images from Instagram. An attempt will be remade in a few minutes.