A weekly challenge at Where’s My Backpack. This week’s word is Sport, not something I tend to frequent either at home and almost never when I travel. There was one exception, however, when we visited Montreal a few year ago. I used to follow the NHL (hockey) when I was younger and Montreal’s Canadiens were “my” team.

I’ve never seen a professional game and when I discovered the “Habs” were playing a home game while we were there, I really wanted to go. I managed to get tickets. Yes, I confess, I got them off eBay which goes against my code of conduct and better judgement.  I only paid slightly more than the face value, though, so I justified it by telling myself I wasn’t paying horribly high scalper prices and there were no tickets left through the official website when I tried.

So, yes, we duly showed up at the Bell Centre. The seats weren’t too bad, not up too high or stuck in a corner. The team lost the game and my husband had no idea what was going on since he’s not a follower of sports and hockey really isn’t very popular in the U.K. where he lived but he was willing to go since I wanted to see the game. We compromised. He came to the game and I was supposed to go to a Slayer concert with him only the concert was cancelled so I think I still owe him one. (We did see a metal concert the next year and I maintain that, though it wasn’t Slayer, I completed my side of the bargain!)

Here then, are a couple of photos from the Montreal Canadiens vs. the Atlanta Thrashers which are no longer playing out of Atlanta, I don’t think. 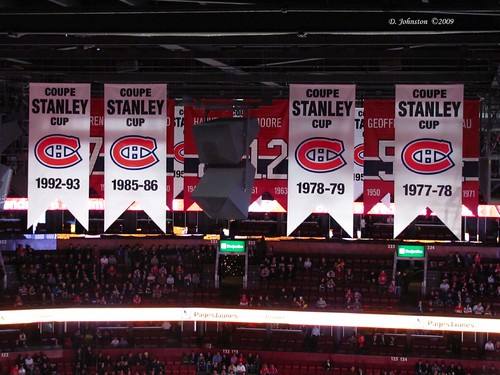 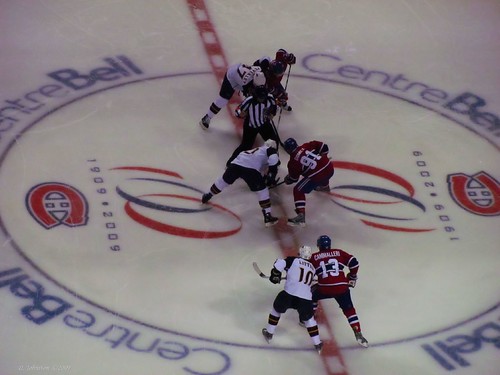 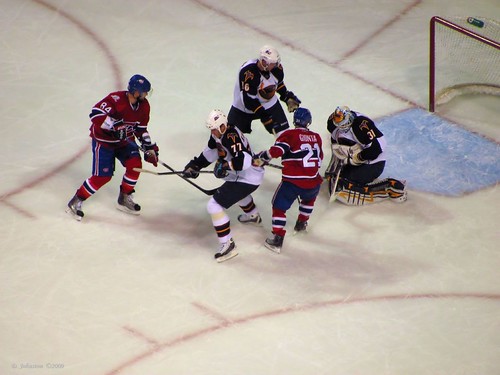 Montreal is in red, unusual as that’s the “away” colour but it was the team’s anniversary and they were wearing a replica of one of the older uniforms