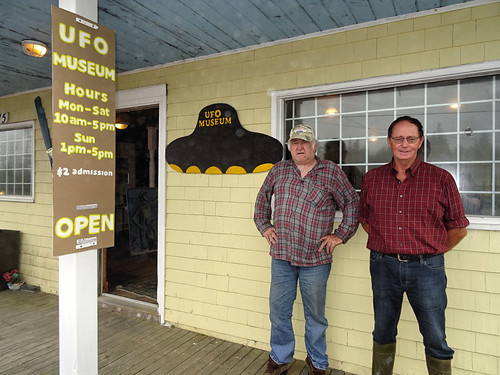 In 1967, lights were seen over the skies of Shag Harbour and Halifax, Nova Scotia. Over Shag Harbour, according to a witness, there were whistling sounds and then a crash.  It very much appeared as if something had crashed into the ocean off the south shore of Nova Scotia. Nobody has ever been able to confirm or deny that what  was seen by many people was extra terrestrial but it hasn’t been denied, either. The Canadian and the U.S. governments have never offered any explanation nor have they allowed anything to the public at all. UFO?

People that witnessed the event to this day believe what they saw could very well be a UFO. Laurie and Peter, in the photo above, were both teenage boys and witnesses to the events. We got the chance to speak to Peter at the tiny UFO museum in the little village of Shag Harbour recently.  Writers and media over the years have tried to get further information from the government but have been firmly shut down. Why? Was it a secret experiment or military operation that went wrong? Divers haven’t found anything but a cylinder with unknown-at-the-time tech washed up near a lighthouse.

2017 marks the 50th anniversary of the event. They have a festival every year in October to mark the notoriety including speakers, seminars and entertainment and hope to make it special for the milestone anniversary. There’s a non-profit society involved in this and their Facebook page is here., with a website here that explains about the incident in more detail. A true quest for the truth if ever there was one.

Shag Harbour is about a 2.5 hour drive from Halifax or about an hour from Yarmouth. The day we visited was foggy, so foggy you could hardly see across the road. Kind of added to the mystery!