One of our day trips was a drive up the eastern shore of Nova Scotia to the village of Sherbrooke where there is an open air “living” museum, called Sherbrooke Village. It’s right in the centre of the village and it was very easy to find. We parked in a lot in the centre of the village but since it took well over 2 hours to get there, we were ready for lunch first. There are a few cafes along the main road and we picked the one that had the best name, Beanie’s Bistro! They were only offering Sunday brunch but it was excellent.

Fully fueled, we’re off to Sherbrooke Village, ready to step back in time to the 19th century.

Sherbrooke is an old settlement and by the 19th century it was prosperous, with farming, fishing and timber filling the coffers. But in 1861, gold was found nearby and for the next 20 years, the town was booming. The mining industry had ups and downs after that, but for the most part it died out, leaving timber as the main industry of the area with salmon fishing bringing in the tourists. The restoration of a village to what it would have been like in the late 19th century was began in 1969 and is ongoing. There are about 2 dozen buildings that are open to the public and are staffed by people wearing period dress who can demonstrate crafts and skills of the era and tell you all about what job they represent.

The weather is in and out but overall, a good day for walking around because it didn’t get too warm and it didn’t rain. We walked the circuit of the two streets where we saw a print shop, a blacksmith, an apothecary, a pottery, a courthouse, a general store, a school house, a church, the home of someone that would have been a business owner and houses that would belong to everyday people and more. 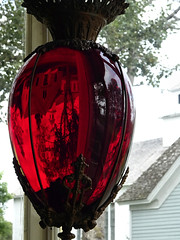 All of the houses and buildings are original and the fancy house, the part owner of the general store, that actually stayed in the family for a number of generations. I think we were told that there is one house that still has someone living in it, someone who works on the grounds somewhere.

They have a team of horses pulling a buggy if you need a ride to ease your aching feet. Pity we didn’t take advantage of that! If we’d been there earlier we could have taken in the show in the courthouse, a Gilbert and Sullivan one act liberetto, Trial by Jury. We heard a bit of the end of it but didn’t go in because they did ticket the event. Even though we would only have caught the tail end, you don’t barge in while a performance is ongoing, ticket or not! Sounded good, though. Watching a woman work the printing press was very interesting. She later showed us how she puts together a plate for it, including any text or a metal-carved plate for graphics. Pity the blacksmith wasn’t in that day, I would have liked to view him doing something on the forge. The young man in the apothecary shop had lots of interesting things to talk about including a big glass ball filled with red fluid hanging in the window, a traditional symbol for the chemist. I never knew that!

One of the two streets in Sherbrooke Village

It took a few hours to peek into all the buildings that were available to see. We had to stop to talk to anyone that happened to be there such as the woman in the pottery, another one working a loom and a lady in the exhibition building who had been sewing a huge quilt entirely by hand. That was the Temperence Hall which is actually owned by the Canadian Legion. Since they can’t sell alcohol in a Temperence Hall, they have a couple of tables of Legion and Canadian souvenirs to help raise money for the Legion!

We trudged our way around and got to the end/beginning where we collapsed in the tea room for a brew. I think they do some light meals there and definitely had sweets on offer but I resisted that. We stopped into the gift shop and staggered back into the village, more than ready to hit the road. We should have driven up to the parking lot right at the entrance but we didn’t think it was that far. It wasn’t, not really, but further than we thought it was and it wasn’t a big deal going in. We were dragging our backsides going back to the car is all!

It’s a fair distance to go for a day trip from Halifax but I think it’s definitely worth it. They close for the season either near the end of September or very early October though they do open for two weekends near Christmas and have seasonal events and markets on. That would be quite nice to see if the driving is ok. 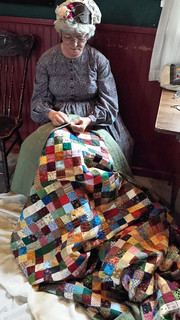 We had an unexpected adventure coming back, though and not a pleasant one. Rather than come back the same way we went out, along the coastal Number 7 route, we decided to go cross country to New Glasgow to pick up the Trans Canada 104. Sounded good in theory. But the road that we picked up was absolutely the worst road I’ve ever driven on. The pavement was in horrific condition and the road kind of twisty in a lot of places. It was kind of scarey and you couldn’t drive very fast or you’d take out the undercarriage of the car if you weren’t careful of the pits, holes, and broken up paving. If we’d gone straight on the number 7 route, we would have ended up at Antigonish and could have picked up the 104 from there, a bit further away and I think that road would probably have been ok, too. You can’t tell from the map what kind of condition the road is in and we thought it would be ok going the way we did. Might have been scenic. It wasn’t particularly.

I was never so glad to get anywhere but off that road! We thought we might try to find somewhere to eat in New Glasgow but it was raining, Sunday night, and it is an unfamiliar place. We couldn’t see anything and it was raining so we managed to get back to the highway and high-tailed it back home, getting a take out meal instead.

Other than that, the day was quite nice. If we ever go again, we’ll stick to Highway 7 there and back, I think. It’s also not too far to stop off and visit if you are driving to or from Cape Breton Island. Be sure not to turn off and head there until you get to where the 7 meets up at Antigonish, though. Trust me on this.

Here are a few photos.

Sherbrooke village is part of the network of Nova Scotia Museums. You can get a yearly pass and drop in to any of their museums all over the province.