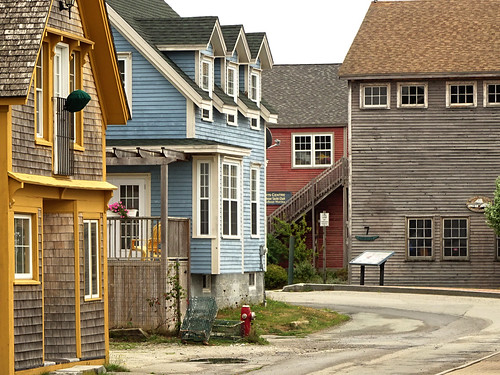 We took a four day road trip in September and had a couple of special things to do. Both of them were weather dependent and as a result, one of them got cancelled but the other one, which I’ll write about in another blog post, went off without a hitch. Considering we had three out of the four days with weather ranging from plain overcast, to thick fog to brilliant and sunny and back to overcast with showers, we did well to get that one day and I’m glad it landed on the day that it did.

Starting off, we headed for the highway, driving a bit more than two hours down the south shore of Nova Scotia. Our first stop was a craft brewery called Boxing Rock. It’s a little place, up a dirt driveway. I’d heard good things about it but it turned out they only do tours on Fridays. We did get a tasting at the small bar and unlucky for me, I wasn’t keen on any of the four that were available but my other half was and he walked out happy with a six-pack under his arm.

The brewery is just outside the town of Shelburne which is one of the older and more historic towns in Nova Scotia. There was a small French Acadian fishing settlement here in the late 17th century but it didn’t last all that long. The harbour was used as a shelter, and it was even the site of a pirate raid at one time, but there wasn’t another permanent European settlement there until British Loyalists arrived in 1783, welcomed by the Crown and aided to start up a habitation. One other interesting fact, just outside the town a village called Birchtown was settled by former slaves, also feeling the Revolution in America. Birchtown became the largest free black settlement in North America but it was pretty rocky for the inhabitants for awhile. Shelburne grew into a major ship building and fishing port over time. 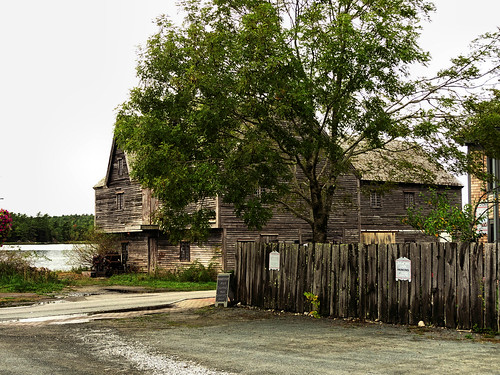 One of the attractions of Shelburne is its history, reflected in the large number of buildings that still exist from the Loyalist days. So much so that it’s been used for a few movie and tv productions, most well known being The Scarlet Letter starring Demi Moore from 1994. A recent production The Book of Negroes was also filmed here in part. I wanted to see the buildings on the waterfront Dock Street and have a wander around. 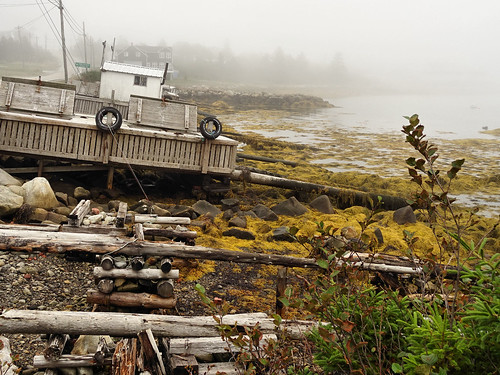 Shoreline at Shag Harbour in the fog

Dock Street is not that long, and is lined pretty much all the way to the shipyard and marina will these old buildings which have been kept up quite well. The side streets leading up to Water Street, Shelburne’s main street, are also lined with gorgeous old houses and gardens. Most of the buildings on Dock Street now contain cafes, gift and craft shops, a pub, a couple of museums and a Bed and Breakfast. We spoke to one young woman in the Cox Warehouse, she had part of it as her artisan workshop. She had some lovely things. Seeing and speaking to the artist makes browsing more fun, getting the story behind some of the pieces and seeing the work in progress. We were going to go into the Dory museem (that’s a type of row boat used for fishing) but the chief Dory maker was gone for the day so we went to the Shelburne County museum across from it. It details the history, most of it maritime related, of the area. There were many interesting artifacts and models in the small two storey museum. There’s also another one, the Ross Thompson museum that we saw but didn’t go into which shows more of the every day life of someone living there. 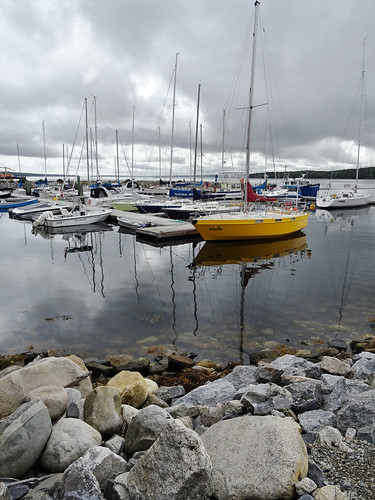 We ended up deciding on a pub on the waterfront for lunch. In retrospect, we likely would have been better to go up to the main street and find something there. The food we had wasn’t much to write home about and was quite underwhelming. The only thing it had going for it was the location on the water. Never mind. We cruised over to where the old buildings by the ship yard are, which also included an event centre and the marina. By now, our feet were getting tired and the sky looked a bit more threatening. We still had a couple of hours to get to Yarmouth for the night. We were supposed to go star gazing at a small observatory near there but we already knew it was cancelled due to the weather. By the time we got out of Shelburne, we drove into extremely thick fog. We wouldn’t have seen any semblence of a star in that!

We did, however, stop into the village of Shag Harbour to peek into the UFO museum. There isn’t much else in Shag Harbour to see. We did take a few photos of the foggy harbour and shoreline before the museum which had lots of newspaper articles, posters, photos and “alien” displays. They had a good book for sale about the event and investigation with up to date information. We spent about a half hour there and then drove the nice coastal route down to Yarmouth for the night.

You can read a little more here.
There are photos from our visit to Shelburne here.