I’ve been blogging about our big trip to British Columbia and Hawaii in November, but there’s another shorter trip that we’ve been looking forward to, as well. We have a house guest visiting form the U.K. in mid September and we’re planning another “Three Amigos” tour, this time,  to Cape Breton Island (The last Three Amigos tour was to Northumberland in the UK, read about that here)  Cape Breton, an island off the east end of Nova Scotia, has often been voted one of the best islands to visit, not just in Nova Scotia but in the world. The magazine Travel + Leisure had it ranked number one  and number 3 in two different years in the past few and it’s also been mentioned by other travel magazines.

It’s not your usual beach and resort type island. There are beaches, yes but the real beauty is in the scenery and the history. Hiking, fishing, golfing for those that want active things to do. The mountains of Cape Breton and the winding Cabot Trail around the tip of the island, with lots of little coastal towns and villages along the way will take you a full day of driving with stops for the local craft shops and tea rooms and cafes. Fortress Louisbourg brings you 300+ years of history. The small city of Sydney has arts and culture and a nice waterfront area. Discover Alexander Graham Bell in Baddeck where he had a summer home. You can go whale watching and spot the seals and birds and other nature from the boats. There’s even a whiskey distillery in Glenora near the Margaree Valley. 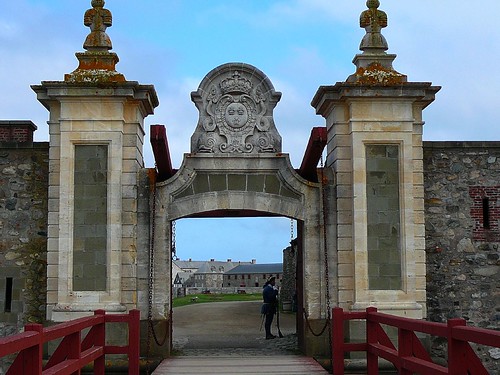 We won’t get to do all of that, but we do hope to go whale watching somewhere off the Cabot Trail and we will definitely go to Louisbourg. (My photos here) It’s an easy day trip from Sydney where we’ll land after a day or two driving around the Cabot Trail exploring. I also fancy seeing the Highland Village Museum  and we’ll likely stop in at the Alexander Graham Bell National Historic Site. It’s really very interesting. . We have a couple of motels and a hotel already booked. All we need is a picnic lunch, some flasks for coffee and tea and a full tank of gas to get us on the road! The great thing is that this year, to celebrate Canada’s 150th birthday, all of the national parks and historic sites are free to enter!

We have a few more of those on our list besides the ones in Cape Breton. We are thinking of other day trips to go on to take our friend around more of this beautiful province. A big bonus, the schooner Bluenose II has been refurbished and will be taking public sailing out of Lunenburg, another World Heritage Site, while our friend is here so we’re going to make plans to drive down the south shore and do that. I’ve never been out on the water in the Bluenose. It just never worked out, timing wise.  Lunenburg is a beautiful town as is nearby Blue Rocks,  Mahone Bay and Chester, also very nice places to stop.

There are museums and the Citadel fortress here in Halifax that he’ll enjoy. Maybe we’ll get into the Annapolis Valley. He might like the Grand Pre National Historic Site commemorating the French Acadian settlers who were the first non-Indigenous settlers in Nova Scotia (which was called Acadie back in the 17th century, thus…Acadians).

September is usually a month of pretty good weather so we’re hoping for as much sun as we can get.