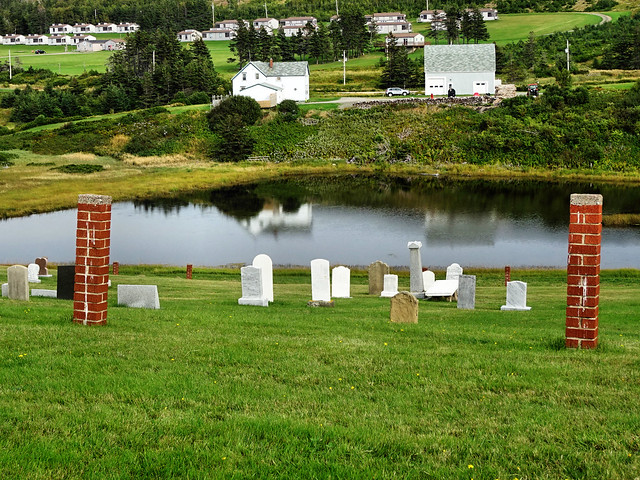 We’ve got a houseguest for a couple of weeks and he’s never been to Canada. We live in a really beautiful part of the country here in the east coast and wanted to show off some of the best of it so a road trip to the island of Cape Breton was organized. We headed out on the road and stopped for a pre-trip breakfast at Tim Hortons before getting on the rainy road to Cape Breton Island. Yes. Rain, most of the time just light showers but it made for a somewhat grim drive. Highway all the way to the island and then we were able to take a more scenic road, the 19, through the east side heading north to Cheticamp.

Malcolm had bought a map of Cape Breton at one of our comfort stops earlier and I had a look at it and spotted something called a Celtic Music Interpretation Centre. Does anyone want to go? Hell yes! We drive on to Judique where it’s located and head in. Malcolm was in heaven in the shop. So many of the cds calling his name! They also had live music in the café, a fiddler called Chrissy Crowley who was absolutely top notch. She was superb as was her pianist accompanist and both are fairly well known. We had a bit of lunch while listening to her play all the instrumental traditional ballads, jigs and reels and it was all I could do from stopping myself squealing out a “EEEEYAH!!!” when she was up to step dance speed.

The rain stopped more or less after that and we chugged along happily listening to one of the cds Malc bought. He kept track of where we were heading on his map and suggested a side scenic road. Good choice. It was quite pretty, following the coast closer than the other road. Then we spied a high open hill, with a little cemetery on the side and doubled back to check it out. It was a lookout spot over Whale Bay, according to the map. The cemetery was surrounded on by little brick chimneys. There’s a nearby area called Chimney corner so it’s likely to do with that. It was an absolutely beautiful spot.

On my way back to the car, I thought about the name “Whale Cove”. Why would it be called that? I turned around to have a look out at the bay. You never know. Yes, yes I spotted some dark shapes out in the bay and called back to the guys. Malc came out with his binoculars and said it looked like about 5 or 6 creatures out in the water. They were too far away to take even a full-zoom photo but we’re pretty certain they were whales which were likely pilot whales! 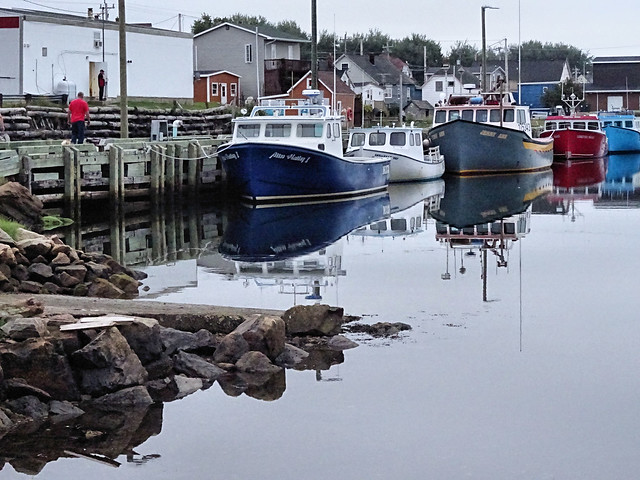 Onward to Cheticamp to find the motel which was about 5 minutes the other side of the town, just at the entrance to the Cape Breton Highlands National Park. The woman working there, the owner, was really nice, showing us a few scenic routes and ways to get around some of the road construction going on and she also recommended a restaurant for dinner tonight and made a reservation. There’s going to be live music there, too, so it should be nice. What a great start to the holiday!

We drove back into the town and had a look at the harbour with the boats. The sheltered water was like glass, it was that still. It was just at dusk so there was still enough light for a few photos. The restaurant had a French woman singing in the dining room. She was all right, sticking to safe crowd favourites in both languages. Most were just not my taste really. The food was as good as predicted so we all enjoyed our meal. We relaxed over dinner and finally headed back to the motel to relax. Tomorrow is our whale watching tour and we’re really hopeful the weather and the sea cooperate.

Sunny, cool and crisp this morning. Unfortunately, it’s also a bit too windy and the whale watching tour was cancelled. The boats can handle the choppy seas but the passengers can’t always and it’s a safety issue. We had got up early, checked out, picked up hot drinks and breakfast at Robins donuts and headed out to Pleasant Bay in plenty of time but to no avail. We did ask what companies did similar tours in the Ingonish area where we’re staying tonight and she gave us the information and even tried to get hold of them to book for us but couldn’t get through. We decided to take in the Whale Interpretive Centre they had there which was very interesting. It showed the evolution of the animal, it’s current environment and habits. They had a model of a full size pilot whale which is very common in the Cape Breton area. It’s a good little museum and well worth a stop if you’re in the area. 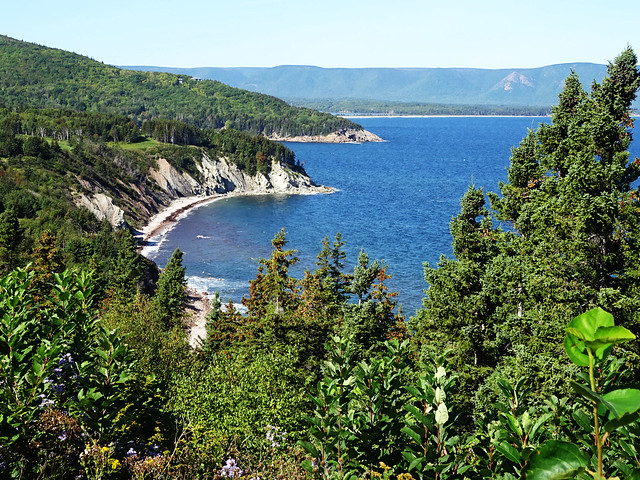 We went on a few drives along the lesser beaten paths and drove to the northernmost community in Nova Scotia, called Meat Cove, accessed by a gravel road. The name apparently came from early settlers driving the deer and moose over the mountain to this location to be butchered and salted and shipped to other locations. We found a good place for lunch in Cape North called Angie’s and filled up the gas tank as well. There aren’t a lot of stations around the long stretch of the Cabot Trail from Cheticamp to Cape North so you should take advantage of it when you find one. The road around the Cape Breton Highlands National Park is hilly and twisty, sometimes following the coast and sometimes cutting across inland. There are lots of trails to hike with fabulous views and there are a number of roadside lookoff spots, little craft shops and a few cafes along the way.

It’s such a lovely day for a drive, too! We made a few photo stops along the way and got to the motel, the Sea Breeze Chalets and Motel in Ingonish Beach about 4 p.m. I called the whale watching company and booked us three spots for tomorrow. The man I spoke to said they would likely be ok to go. The Ingonish area is a popular stop. There are lots of motels and holiday chalets for rent. Our rooms face the sea from across the road. We’ll sort out somewhere to eat tonight and have a recommendation for breakfast tomorrow. It’s only a 10 minute drive to the harbour where the tour boat is located so we won’t have to get up quite so early! 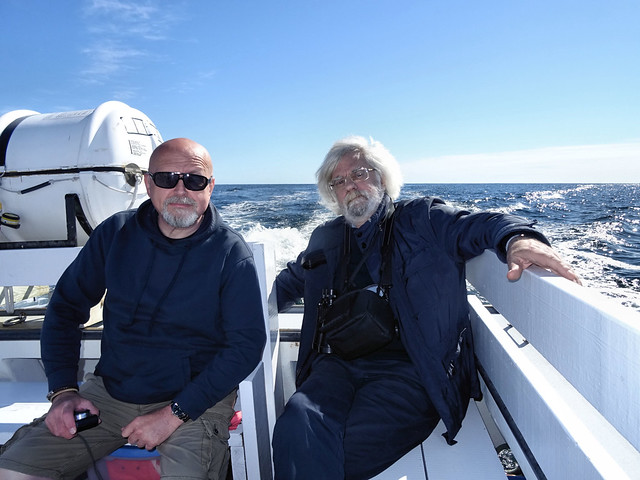 We ended up at the Main Street restaurant and I went all out for something different and had swordfish, caught locally in Neil’s Harbour. I thought it was very good. Graham was not overly impressed with his burger, thought it was ok but really didn’t like the fries but Malc enjoyed his vegetarian meal a lot. Back to the motel for the night.

We checked out and went to the café up the road that was recommended to us, the Bean Barn Café, and they did indeed provide delicious all day breakfasts. We found the Whale Watching company down a small side road very close to where we ate last night and bought our tickets. It’s another beautiful day, perfect weather to be out on the boat. It’s a smaller boat and there were about 12 passengers so it wasn’t crowded at all. Unfortunately, we didn’t see any whales but we did see seals, bald eagles and a sunfish which was a good sized fish and had fins and flippers. There was a demonstration on how the lobster traps work as well.

We drove from there to the pretty town of Baddeck to see the Alexander Graham Bell museum. Because this year celebrates Canada’s 150th birthday, all of the National Historic Sites and parks have free entry. This is one on the list. It’s a very interesting museum. We never realized how many things Bell invented or started that were cutting edge for the time. Not everything worked out but he was fascinated with how things worked and tried to find new ways to do things all the time. He didn’t actually invent the telephone here in Canada but he maintained a summer home here for many years from about the mid 1880s onward.

It’s off to the city of Sydney tonight for two nights. Sydney is an industrial city at it’s core though these days the former regional industries of coal mining and steel are things of the past. We checked into the Comfort Inn on Kings Road. Be warned, there is no elevator, but they only have two floors. Nice large room, good wifi and lots of space. Breakfast is free but leaves a lot to be desired.

We had supper at the Old Triangle, a sister pub to the one in Halifax. Food was good but the first young man playing music was inadequate to the task. Reminded me of a busker who wants to play everything like it’s a party tune, and faster than it’s meant to be. The main act came on at 9:30. They were much better singers and players but their choice of tunes was mediocre middle of the road. We didn’t stay.

I’ll be back with part 2 very soon, where we visit the Fortress Louisbourg and the open air Highland Village museum. 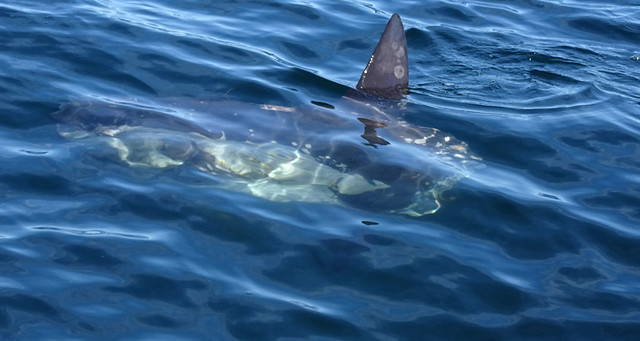 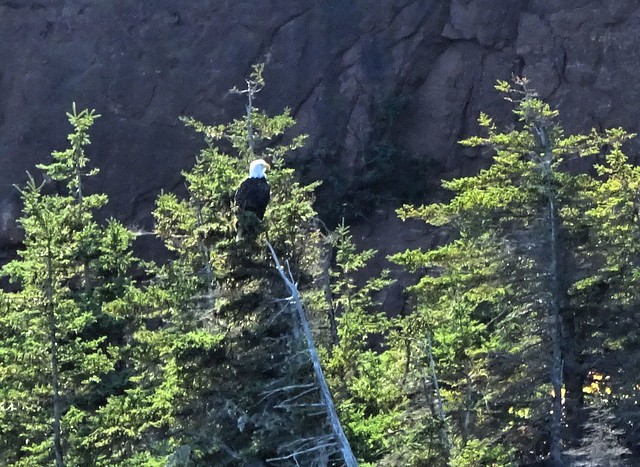