Fortress Louisbourg from across the bay

We’ve decided to base ourselves in Sydney, Cape Breton for two nights. Sydney is only a short drive of about 30 minutes or so to Louisbourg where the restoration of the French fortress is.

The Fortress Louisbourg was established by the French in the name of King Louis in the early 18th century. While it was primarily there to watch over the lucrative cod fishing trade, there were military stationed as well, just in case, since there was always and inevitably another war just over the horizon. This was always a commercial town, with few farmers. It was filled with soldiers, fishermen and merchants and their families. There was a contingent of support with religious, medical and domestic servants, slaves and the like. There were inns, taverns, butchers, bakers, forges, all the services you need to contribute to a living community.

The site that’s there now as a National Historic Site represents the fort as it would have been in 1744, one year before the first time the British invaded. It changed hands between the British and French several times over the next couple of decades until it ended up with the British. They destroyed it in 1760. The current site is only about 20 percent of the original site. I didn’t know that before and it must have been enormous! There were five bastions for the army with barracks etc., 2.5 miles of wall surrounding and protecting the town and many, many merchants and businesses. Parks Canada began restoring the Fortress in the 1960s.

The park today employs seasonal workers who all dress in period costume in various roles and are very interesting to talk to. They all really know the history of the fortress and of the characters they play. They have events all summer, they have walking tours and special tours. There are often demonstrations of various types of things from cooking to crafts to musket fire and military drill. It’s pretty neat to step back 300 years in time.

View from the Bastion battlements over the town of Louisbourg

We arrived mid morning and at this time of year, near the end of the season, we could park right next to the site. Normally, you park by a visitor centre a couple of kilometres away and are bussed in. It was actually fairly busy because I believe there were a lot of tourists from a cruise ship in Sydney. We parked and headed to the visitor centre to get a map and off we went. We decided to investigate the King’s Bastion first, where the soldiers would be quartered as well as the unmarried officers. This one also included the Franciscan chapel, a jail where the prisoners would be shackled to the bunk, the governor’s quarters and a court. Graham and Malc walked around up on the battlements for a while leaving me to look into some of the other nooks and crannies and rest my bones in the sun as well. 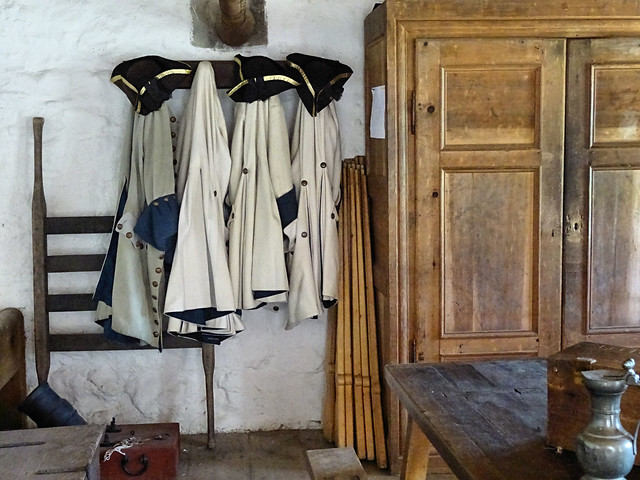 In the Officers’ quarters at the King’s Bastion, Louisbourg

We probably spent a good hour in the bastion and were starting to get a bit hungry. We made our way down the main street, looking into various buildings and listening to some of the staff talk. We got to the café but all it offered was tea, coffee and buns so we went to the main restaurant where you sit at communal tables and eat 18th century style with a pewter spoon and dish. That’s it. No fork or knife. The food they offer is all easily eaten with what you have. I had a really tasty piece of fish with vegetables and a vegetable soup to start with. Malc had French toast which he said was really, really good and Graham had chicken in a mushroom cream sauce, and pea soup, also really nice. I also had a small cup of French style drinking chocolate which seemed to be bitter unsweetened chocolate grated and melted in a bit of water or maybe milk. Different, anyway, very chocolatey.

Onward. We wandered around the site looking here and there, taking lots of pictures of course. If you take the time to talk to the various re-enactors, you can really steep yourself in the history of the fortress and the era it depicts.

Our feet finally gave out and we made our way back to the car. We stopped in the town of Louisbourg to have a look at the old train cars at a museum which was closed and we drove out to the old lighthouse as well. The original lighthouse on the site was erected in 1734 and destroyed in 1758 during the second seige of Louisbourg. The current lighthouse dates to the 1920s.

Tonight, we decided on an Indian meal at a fairly new restaurant I found while searching the area on Google, called Mian’s. It seemed to have good reviews but in the end, it was another disappointment, this time it was mine. Graham enjoyed his meal and Malc liked his. The samosas we started with were superb but my beef was dry and too chewy. Apparently the coffee was awful and they didn’t have milk for the tea, only cream. Unimpressed.

It’s back on the road tomorrow for home, stopping at a Highland Village open air museum on the way. A successful road trip indeed, with mostly spectacular weather! 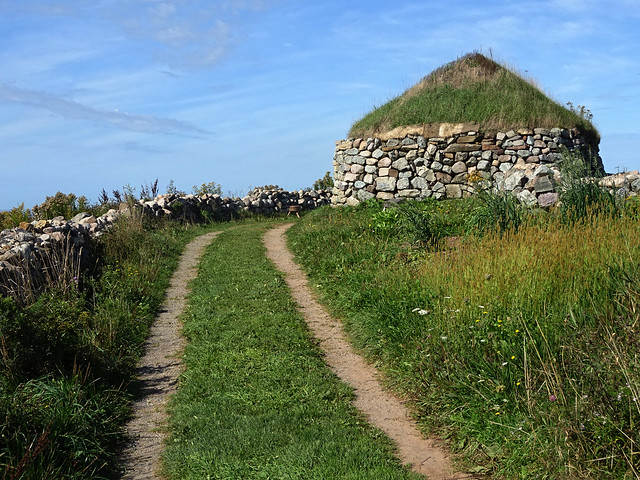 The sun is up and shining and we are hopeful for another nice day. We are going to immerse ourselves in more history today.  This morning’s drive took us along the side of one of the lovely lakes though we mostly only saw it a bit through the trees.

The Highland Village Museum, part of the Nova Scotia Museum network, is high on a hill in Iona overlooking Bras d’or lake and gives you the experience of the Scottish immigrant to Nova Scotia between 1770 and 1830 and then the life of the community and Scottish Gaelic culture over the next 100 years or so as well.  Its staff are all dressed in period costume and talk to you of their lives for the period they represent. There are 11 period buildings on the site.

The first one was in a little “black house”, which is a stone shieling type of dwelling with a thatched roof. The woman there was very much into character and was really good. She told us lots of information about why and how the people in Scotland left home for a new life and what life was like in Scotland for these various clans in the western Hebrides islands. She’d speak partly in Gaelic and then in English which enhanced the experience. 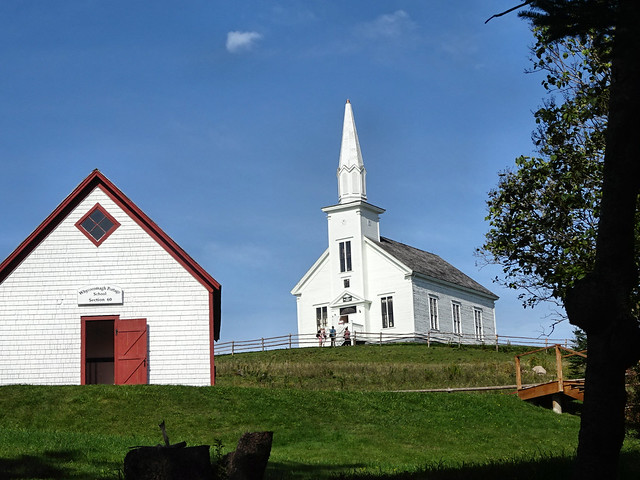 We climbed up the gravel paths slowly and talked to a few others in the next couple of homes and then it was all downhill. We were also overtaken by several groups of tourists bussed in from another cruise ship so we felt a bit flustered and rushed at times. Most of the buildings were brought here from other sites around the island to create the village and they often have demonstrations of various crafts and cookery.

I have a friend who told me that her late husband’s father and grandfather were ministers in the church, originally located in Malagawatch, that is now located here. He spent many a Sunday listening to long sermons in it! They have a general store, a school house and a forge as well as residential homes represented. The visitor centre gift shop has a good selection of nice things and there’s a small coffee shop on site. The whole village is very well done and informative and very much worth a stop. 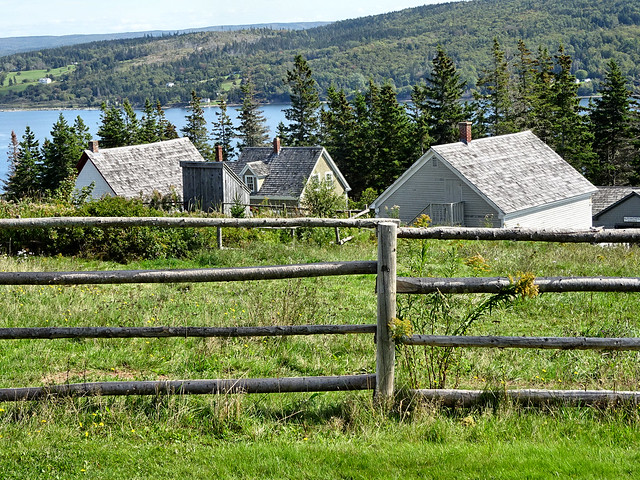 We started to lose the sun and from there, pointed the car in the direction of the Canso Causeway. We stopped in a market type place for lunch in Whycogomah and had another leg stretcher near New Glasgow and got home about 7. Brilliant few days on the road! 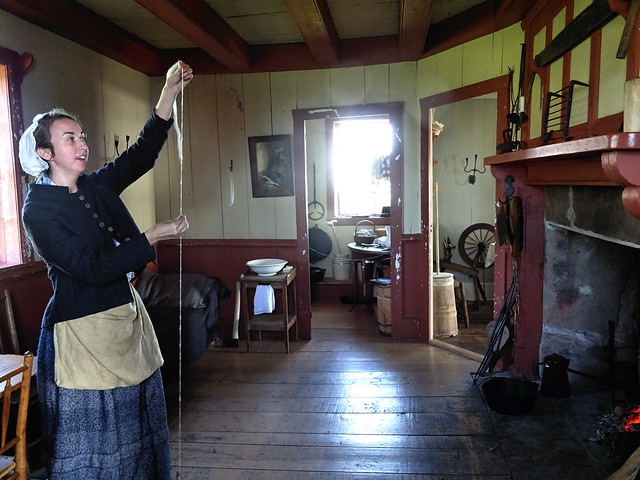 Louisbourg Harbour lighthouse and the ruins of the original one, which was the oldest in Canada