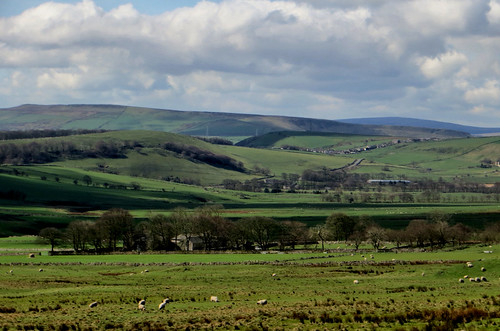 Close to a farm’s track where the GPS (Satnav) led us. That road in the distance is where we wanted to go!

The Daily Post at WordPress encourages writers to blog and offers two ways to inspire a new post on your blog. They have a weekly photo challenge which I’ve taken up lots of times since my travel photography is one of the reasons I started this blog. They also suggest a word once a week that you might relate to in some way that might not even *be* about that word/prompt. But if it gets the creative juices flowing, it worked, didn’t it?

This week’s word is “meander”. To meander is to follow a winding road or curved path. To me, that meandering path is random, zigs and zags, unexpected turns. Traveling can be like that, too. I tend to be an organizer. Not to the minute or even necessarily to the day but I like to make sure I have a bed booked for the night and I like to know I’ll be getting from A to B on the day when the hotel in B is booked. Generally how I get there is predetermined as well. If we are driving the roads or walking through a city, then those streets and roads have meandering potential and we often take it. The end result is usually always been worth the veering off the beaten track.

My first ever big trip was in high school on a tour sponsored by the French department. We flew in and out of Rome, taking the train to Paris then to Nice on the French Riviera and the train again back to Rome. There wasn’t a lot of time for meandering. The tour did give us some free time and we headed out with specific destinations in mind but I don’t really recall any meandering, just looking for the best way to get where we wanted to go. To add meandering into the mix meant we knew we would get to destination B but didn’t really care how we got there or how long it took.

The next big trip was a bus tour of the UK when I was all grown up, divorced, and finally able to afford to travel to my first bucket list destination. London and the UK and I had been soul mates most of my life. The bus tour would hit the highlights of England, Scotland and Wales with a few days in London at either end. Of course the bus didn’t meander, it had a schedule to meet. But we had free time to do what we wanted, whether it was an extended lunch period or an afternoon. Most evenings were free as well. Plenty of chances to see new things while meandering and exploring.

Neil’s Yard from a later visit

My first visit to London in 1993 was mostly free time aside from a tour around the Tower of London and I found myself in the Covent Garden area one sunny afternoon in late August/early September. I spied a narrow alley and I wondered where that would lead. There were lots of people coming and going through it so I walked into the shade it provided, the tall buildings with small shops lining each side. I came to the other end, out into the open. It was a sunny courtyard. There were benches where you could sit. There were shops and a couple of cafes. There were brightly coloured flags hanging everywhere. It was Neil’s Yard and it was enchanting. I’ve been back once or twice but it’s never had the same effect as discovering it that first time.

Later on, when I was involved in a long distance relationship with a lovely man who lived in the UK, we would book a rental car for a week of my UK visit to him and plan road trips or day trips. We generally weren’t in a hurry so meandering was often involved. We’d see a sign for a museum we didn’t know existed. We’d notice a really great view to stop off and admire. We’d often have a GPS (“Sat Nav” in UK-speak) directing us to our destination but don’t think that took the meander out of the equation. Oh no. Sometimes I think the GPS had a meander chip of its own, judging by the spots it tended to direct us to. The little track across the back of someone’s farm comes to mind as does an impossibly narrow lane in the old centre of St. Ives. We laugh about it now.

I haven’t yet taken a trip where we have no accommodations booked ahead of time. We talk about it now and then. We may even do it someday. We’re looking at a potential road trip around Scotland this fall and maybe that might be a good time to take the leap of faith, head into the Highlands and see how long it takes and how difficult or easy it would be to find a bed for the night at the end of each new day. Maybe with the help of a hotel app on our phone and a decent signal in a town centre it’s doable. Or is that cheating?