The Daily Post not only issues photo challenges, they also do a daily prompt to encourage writing and blogging. Today’s prompt is Music. When I go through my photo archives, I realize that music features quite a bit in my travels in many different ways. Mostly, I don’t travel specifically because of music but it seems to pop up frequently in one aspect or another. Maybe we have seen some musical instruments in shops, museums or other places. Sometimes, I’ve seen performances, both formal and by buskers and street musicians.

My husband is a musician so music is a big part of his life. I’m not quite so passionate about it but I do enjoy it. I have a memory of waiting for a bus on Tottenham Court Road in London one night and seeing him gazing into a music shop window at an array of guitars. We also visited a guitar shop in Montreal and in the window of another shop in London, spotted miniature replicas of guitars and drums where the originals were owned by famous rock stars. 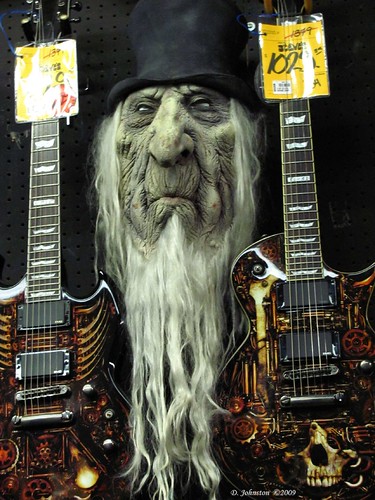 From Steve’s Music store in Montreal 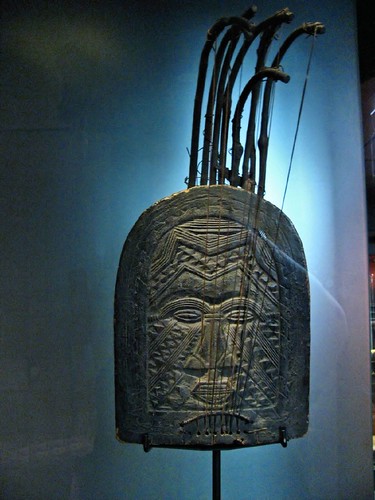 From the Musical Instrument Museum in Brussels

We found out that there’s a Musical Instrument Museum in Brussels. We have a very limited visit to Brussels but still squeezed in a visit to the museum even though it meant that our hop on hop off bus tour of the city was cut short so that we could make our train! It was in a beautiful old Art Deco building and had four floors of instruments of all sorts from hundreds of countries and eras in history. Fascinating, Captain!
//embedr.flickr.com/assets/client-code.js
Street musicians are found everywhere, maybe one person on a corner or a whole group. Some I recall include this group of string musicians on the Stroget in Copenhagen. The big triangular guitar type instrument was particularly interesting! When you go to Scotland, there are inevitably bagpipers all over the country, wherever there are tourists. On one particular visit while on a bus tour, we stopped at Loch Lomond and there was a piper there. We also stopped at the border between Scotland and England for a photo opportunity and yes, in the middle of the countryside, there was a piper there, too. I recall that vividly because the piper played Hava Nagila for a group of women on our bus who were from Israel and I turned around, hearing the unusual song coming from the pipes and saw them dancing by the piper. This was before digital cameras with video and I wasn’t quick enough to get a photo. There was a piper at the base of the castle on the Holy Isle of Lindisfarne in Northumberland, last year, too. Bagpipes are not a favourite for everyone but I do like them! 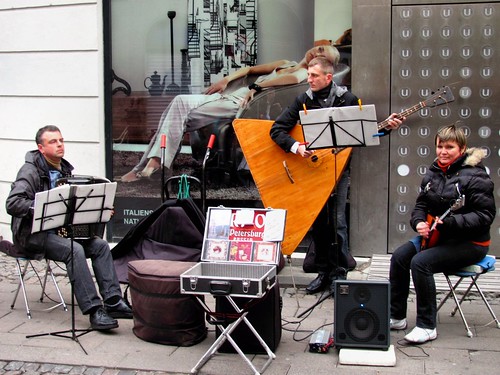 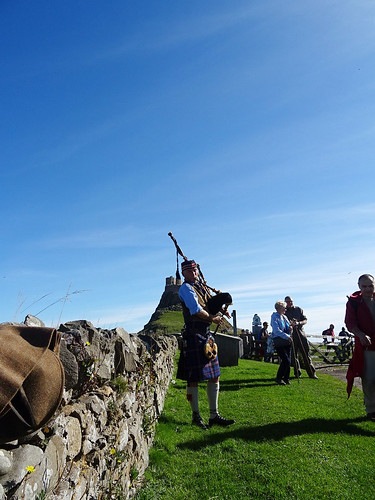 Piper on the island of Lindisfarne

I’ve only traveled specifically for a musical reason once (so far) when I traveled to Montreal in the summer a couple of years ago to see Queen and Adam Lambert perform at the Bell Centre. They’re a bucket list band for me, and I never had the chance to see them when Freddie Mercury was alive. I’m very glad I went and maybe we might do that again sometime. 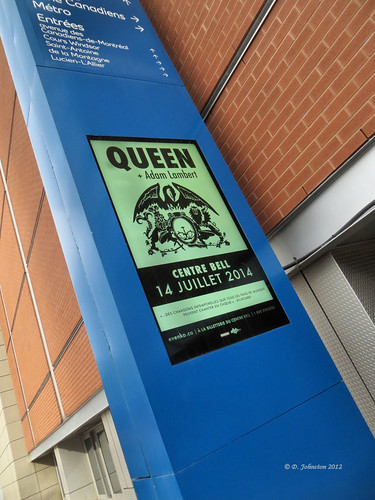 Music and musical references turn up in lots of places, whether it’s expected or not. In Liverpool, across from the replica of The Cavern Club where the Beatles started out, is a music wall, with the name of a famous artist or band in every brick. I thought that was way better than the club! 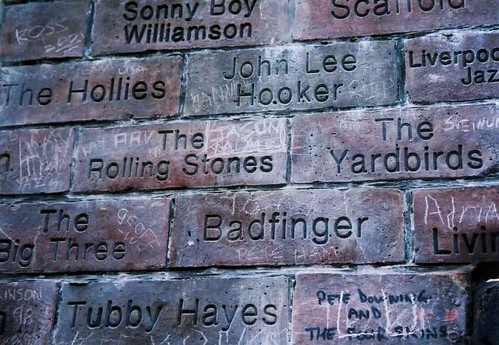 The Wall of Fame in Matthew Street, Liverpool

I’ve gone to see musicals on stage in both London and New York. I’ve admired antique pianos, pipe organs, and other old instruments in musuems, stately homes, cathedrals, churches and sometimes you see an instrument as a work of art. There’s an old building in Manchester’s Northern Quarter that contains 4 floors of funky market shops and stalls. Outside is a sculpture of an enormous saxophone. There’s usually always music playing in cafes and restaurants, loudly or softly. The Edinburgh Tattoo has numerous pipe and drum bands as well as marching bands and the skirl of the pipes from the Lone Piper on the top of the castle at the end is haunting.

Some other random musical memories: A couple dancing the tango in Rome in Piazza Navona. While on a bus tour of Italy, I joined an “optional” dinner with two or three men who did dual duty of serving the dinner and singing Italian traditional songs, opera and “pop”. Guesting on the Copenhagen based Metal Breakfast Radio Show, playing metal music and having a few bevvies. Seeing Paul McCartney at the Manchester Evening News (it’s not called that now) arena in Manchester. Eating in Hard Rock Cafe restaurants in a few different cities, (Toronto, Boston, Rome, Manchester) and taking in all the rock music memorabilia. Late night in the residence bar in a hotel in Dublin listening to a jam session of artists, vocals by one of our group of travelers, Rose.

Locally, here in Halifax, there’s a busker festival every summer. There used to be a Scottish Highand Games day with pipe and drums, and dancing competitions and there still is a weekend of games and music in the town of Antigonish. There’s a Celtic Colours music festival in Cape Breton, Nova Scotia every October. We have several parades through the summer and there are outdoor free concerts. Halifax also has a Jazz Festival in July. Next weekend, we’re going to a guitar festival where there will be a small museum, a day long battle of the bands, and lots of interesting guitars for sale to look at. There’s a large track on the Halifax Commons where you can skate in the winter to piped in music.

Music is everywhere, home and away, and it always adds a layer, a dimension to places we visit. It might be a song you hear while you are away that will bring memories back to you. Music can give you insight into local traditions and culture and that makes music a very important aspect of travel. Chinese Opera, Spanish Flamenco dancing, African tribal music, Bollywood style music from India, Swiss yodeling, Italian opera, German “Oompah” music, Portuguese Fado, Appalachian blue grass. The list is far too long to list everything. Music is an intricate part of travel, more than you realize, I bet.

One of my top 5 things that I did this year was fly to Montreal to see my Bucket List band, Queen (+ Adam Lambert). It was a speed-trip, in on Sunday and out on Tuesday but Montreal in July didn’t disappoint and the concert was the best thing ever! 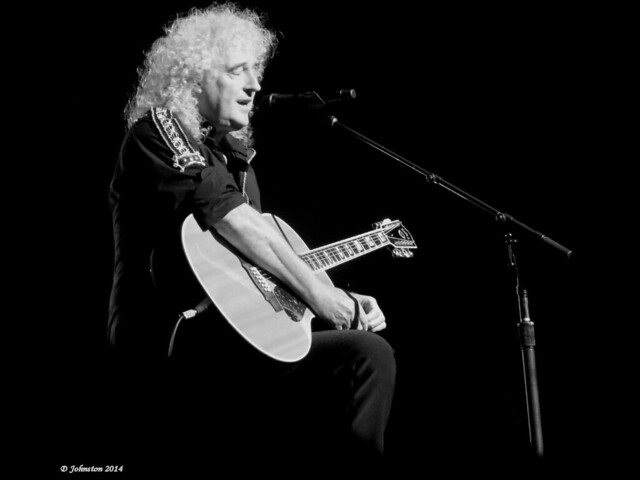 Brian May of Queen. Singing Love of my Life

Given that we’ve sailed through Valentine’s Day, Where’s My Backpack has a travel theme of Romance this week. I had to think how I would relate this to travel. We do go to some romantic locations like Paris and Rome and we really enjoy exploring new places and making new memories. Our road trip to Cornwall was brilliant and we were going to do a road trip to Scotland last year but it got side lined.

What’s really romantic, though, is that my fella is an artist and for my birthday every year, he draws me a cariacature/cartoon and often it features our travel location from that past year.

Here’s a few of them:

And the other romantic thing that he does is write and record me a song every year for Christmas. You can hear the “Lurve” album here.  Some of those mention travel and flights because ours is a long distance relationship.