There are a number of countries that will put forth the claim that they make the best chocolate in the world. Canada and the United States really aren’t two of them unless you go to the small, independent chocolatiers and you will find them here but they aren’t as numerous as in Europe (and other places as well). Mass produced chocolate here in Canada isn’t too bad. I find it less creamy and more sugary if it’s made in the US. It’s all very subjective, mind you. Mass produced chocolate in the UK is better than ours and that’s not even getting into the specialist product.

On continental Europe, however, you’ll really find the chocolate wars heat up. The best known names for the title of the best are the Swiss and the Belgian. My experience with Swiss chocolate is pretty much limited to Toblerone bars. My experience with chocolate from Germany, Holland, France, Denmark and Italy is also limited. They do make nice chocolate, I’m not debating that. I have bought Belgian chocolate in one of the cities where there are chocolatiers littered all over the place – Bruges. It is, to use east coast Canada slang, “right some good!”.

There’s a new chocolatier shop in Halifax on Spring Garden Road. I’ve been resisting temptation but I might not be able to hold out much longer.

Here’s a few photos from my travels. 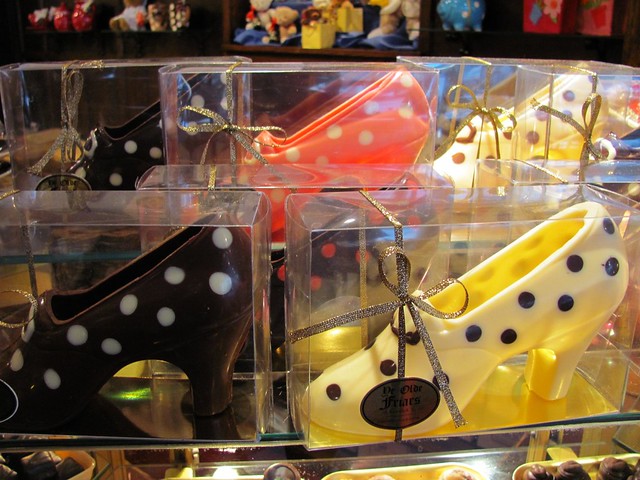 Dark and white chocolate shoes, in a shop in Keswick, the Lake District, England 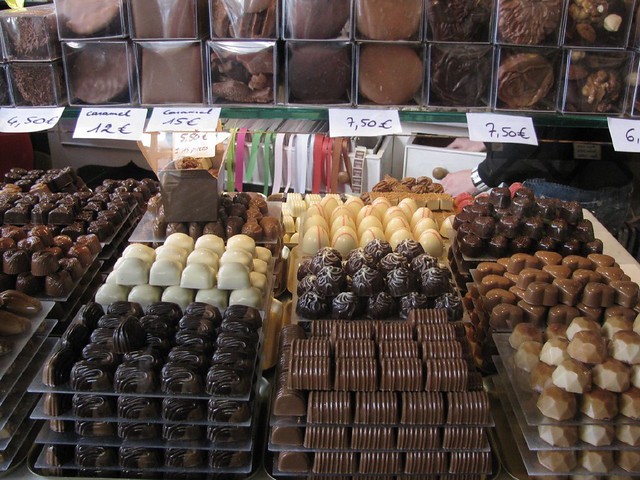 Dumon Chocolates in Bruges, one of the top chocolate makers there 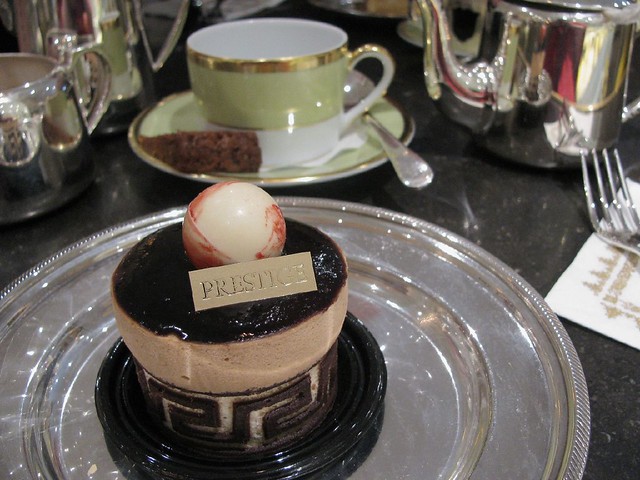 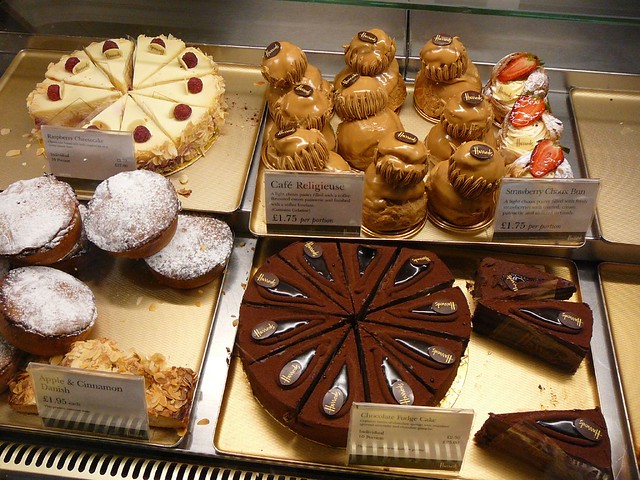 Display at Harrods, at Easter. 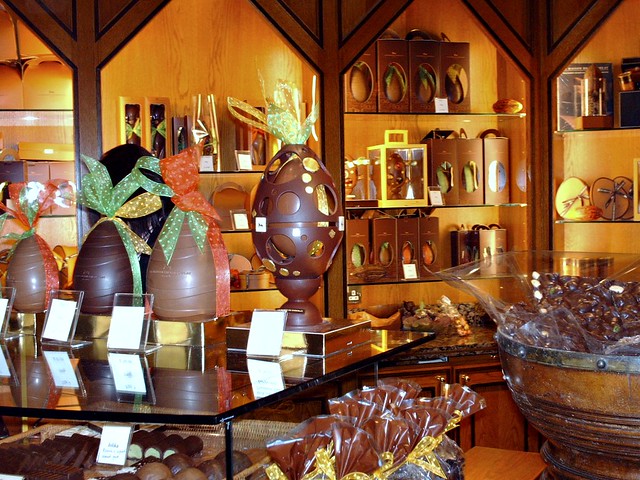 Like most people, I like to pick up souvenirs to remember my travels. I used to buy prints but I now have a stack of them, still unframed, and it doesn’t look like I’m going to get around to that. Plus, I don’t have enough wall to put them all up anyway. They’re all various sizes so they won’t fit neatly into a photo album or scrap book though that might be an option for some of them. Anyway, I’ve stopped buying prints.

I often will buy a tea towel. Some years ago,  I was traveling with a group of friends and one of them mentioned that she collected tea towels and could remember her journeys every time she used one. Good idea! I think I’ll do that, too and I’ve amassed a nice collection of them. I usually leave two hanging in the kitchen and I sometimes will pin one up on the kitchen wall as artwork, changing them when I get a new one or just feel like something different.

I’ve bought little houses or buildings, ornament sized as I do collect those if i find a really nice one that reflects the architectural style of the area. One of the main things I’ve collected is, as you can see by the photo, fridge magnets. They’re not expensive, are easy to pack and transport and you can see them and remember all the places you’ve been every time you open the fridge door.  You can see I’ve got quite a few. I’ve had some lovely folks bring me one from their travels but most of these are my own. I’m beginning to have a bad case of magnet creep, mind you. They’re already starting to filter off the top fridge door onto the bottom one and around the side.  There are a small number that aren’t travel related but most of them are. I won’t list all the locations, but my newest one was donated by a coworker who recently visited Australia! You can see that one, a yellowy diamond shaped one, near the top right.

I did see a good idea somewhere on the net, a suggestion for building a shadow box with a back panel of tin, covered in pretty paper or fabric, with the magnets stuck on them and then the whole thing hung on the wall. That might be a very good thing to look into. It would declutter my fridge nicely and still display my magnets. I might have to make several of them, though. Still…

It would clear the way for the next lot!

Nutcrackers at the Manchester Christmas Markets

Now, where was I? Oh yes, we’d seen Rievaulx Abbey on the way home from our road trip. I only had one more day to spend with my fella before heading home. This weekend was the opening weekend for the Manchester Christmas Markets and I wanted to go.  We parked in an NCP garage and walked over Deansgate to St. Ann’s Square where some of the markets were.

The Manchester Christmas Markets are spread over a few streets from the Exchange Square by the Triangle shopping centre, behind the new Selfige’s and M&S over through St. Ann’s Square, down King St., up Brazenose St. and then filling Albert Square in front of the Victorian Town Hall with it’s soaring clock tower and massive glittery Santa looking over it all. They have small wooden huts set up for all the vendors and many of them are internationally themed, such as French or German to echo the markets on the Continent. We arrived by about 11 a.m. in hopes of seeing some of  it before the worst of the crowds hit but we weren’t too successful.

There are lots of nice things to see and even more nice things to eat and drink. My fella wasn’t overly impressed, he didn’t think there was all that much to appeal to him, or men in general (his opinion). He may be right I suppose, depending on your interests. There was a lot of Christmas decoration and toys, handmade items, jewelry, ceramics and the food ranged from meats, cheese, wine, beer, and lots of sweets. They had a few cafes and beer gardens set up and some stalls selling a variety of mulled hot drinks which they would serve in a souvenir mug. They charged £2 as a deposit on the mug but you could keep it if you want or get the money back if you returned it. I did try one and kept the mug though wasn’t as keen on the mulled wine I tried.

How many kinds of fudge can you imagine!

By the time we got to the Town Hall, the crowds were thick. They always seemed to be heading in the direction against the one I was walking, naturally. We ducked into the Town Hall because I had heard it was very nice and it was except there was also a market in there for the vendors from the Northern Quarter market, Affleck’s. That’s the place you want to go for goth, punk, hip, club gear, and all kinds of off the beaten track stuff. But the problem was that in there the bottleneck of humankind was even worse! We didn’t last too long and got out alive. From there, the crowds were just too much and we left. Yeesh!

We thought we’d drive into the countryside for a nice pub lunch at a place G. has liked for years. We’d gone there a few years ago and it was very good food with lovely views over the West Pennines. We found it, but it seems to be closed and possibly they are rebuilding but I’m not sure. It was a disappointment. We headed back into town a different way and got a bit lost (we had left the SatNav home!) but we found a motorway eventually and made it back.

Thus my trip was over. Monday was traveling day and we had to be up at 4:30 a.m. or “Stupid O’Clock”. My flight was 7:20 and we had to return the rental car as well. Got checked in, we stopped for a coffee to keep ourselves going. G. had to go back to town to work so he had a long day too.  Time to say a few prayers to the Travel Gods. The trip over from Canada was not very pleasant with crowded planes and long queues. I was really hoping the return journey through terminal 5 to 3 in Heathrow wasn’t going to be similar.

The Gods heard me this time. The flight to Heathrow was actually not too uncomfortable even thought it was full and I had the middle seat. It felt as if the seats were just a little more roomy and that made all the difference. The transfer was smooth and there were no long lines at the airline desk where I had to get my boarding pass for the next flight and even the security line wasn’t bad at all. I had a snack and a cup of tea in the large lounge in Terminal 3 but I didn’t walk around and browse in the shops because it would have cost me money! The gate for the flight wasn’t at the back end of beyond and the best thing, there was an empty seat beside me and it stayed that way!

The flight was mostly smooth and what turbulence there was wasn’t too rough. Food was decent. Movie sucked but I chose the Woody Allen “To Rome With Love” and I knew I wouldn’t like it. I only wanted to see a last glimpse of Rome.  I did try to sleep but probably just dozed a little here and there. Ah it was good to touch down in Canada!. The Luggage Gods were kind and my bags arrived with me.

We always look ahead to our next visit or more. I may be going back over in mid January for a long weekend for an event I’ve been invited to and if it goes ok at work, I definitely will make the plans. It’s a bonus visit with G. and even if it’s just a few days, it’s quality time together. G. will come to Canada in May and we are thinking about a visit to New York City. Next fall I will go to the  UK and we are talking about a road trip to Scotland.  It’s hard to come back because we only get to see each other twice a  year as a rule. With the constant contact through the net, we keep the bond strong but it isn’t a substitute for real face-time. But it is what it is for now.

Until the next time.