After our first full day in Vancouver, what next? Turned out, the weekend was full of weird and wonderful.

In addition to seeing a bit of the city, one of the things we did while in Vancouver was attend a Fan Expo, similar to the Science Fiction Comic Con (convention). Fans of SciFi, Fantasy, comics, super heros and their worlds and Japanese animation flock to these conventions. Many of them dress up as favourite characters. There are guests from popular televisions shows and artists of graphic novels and comics there to talk to fans. People can pay for autographs and photos with their favourites and sit in the audience and listen to the actors talk about their craft and the show.

There is usually a huge hall full of vendors where you can buy all manner of related items. It’s a great place to get swag, tshirts, memorabilia and related items to your favourite genres and programs. We bought a one day pass though the convention goes on all weekend. The Vancouver Convention Centre is enormous, covering two buildings on the waterfront. It was a rainy day so we decided to take a taxi to the centre. We still ended up trekking about between the two buildings because we weren’t sure where to go.

The convention was in the main building that looks like a ship with full sails on it. It’s also where cruise ships dock. As you walk down the length of it, in the ground are inlaid plaques with various Canadian cities from the West to the East and then to the North as you walk along. We finally got in and got our entry bracelets and tried to figure out where everything was. My husband has a ticket to get a photo with one of his favourites and we wanted to sit in on two panel discussions and still have time to peruse the vendors. One section of vendors was Steampunk oriented which is something I really like.

The convention was hugely crowded so it took patience to work your way along the vendor stalls and through the hallways to find the various rooms. We have a similar convention here called Hal-con which, while crowded, seems a little more manageable.

We spent a great afternoon looking at all the items, listening to the panels  talk about the other actors and behind the scenes and people watching for all the great costumes. Lots of people go to such a great deal of trouble to represent characters in painstaking detail.

The second allocation of weird and wonderful was the Museum of Anthropology at University of British Columbia. One of the prime focuses of the museum is the indigenous art of the people of British Columbia which is absolutely gorgeous. It’s very distinctive and it’s different from the art of the First Nations people from the east coast of Canada where I’m from which is also lovely, don’t get me wrong.

The museum has totem poles and pieces of them, as well as other artifacts such as bent wood boxes, feast “bowls” and intriguing sculpture. It’s also got collections from a great many other cultures around the world, primarily Asiatic and from the South Seas and Oceana but also from Europe and Africa. There are treasures, and maps and papers.You could spend all day there and never see it all. It is very intriguing and you’ll learn a lot. I don’t think you could see it all in one go because there is just too much to take in. We spent a couple of hours wandering about and spent a few dollars in the gift shop, too.

We had gone there with friends who live locally and after the museum closed, we found a Chinese restaurant for a nice meal to top off the day and the weekend. This is pretty much the end of our visit to Vancouver as well. The next day, we used the coin laundry in the morning before we had to check out and transferred to a Ramada by the airport, thinking it would be easier to get to the airport the next day if we were already nearby. In retrospect, we probably should have just spent an extra night at the Rosedale and enjoyed that last full day in the city. Turns out even a taxi to the airport from downtown wasn’t all that expensive.

We checked into the Ramada which was a couple of blocks from a large shopping mall, the Richmond Centre. We plodded over there under cloudy, rather wet skies and had some lunch in the food court along with a bit of a wander through the mall. Both of  us are on pins now, excited to leave for Hawaii but we still have to wait until tomorrow afternoon. We did end up getting a shuttle to the airport a lot earlier than we needed to after checking out of the Ramada just so we didn’t have to sit around the hotel lobby. At least in an airport, your baggage is checked and you can walk around and look at the shops. Pretty soon it’s time to board…. 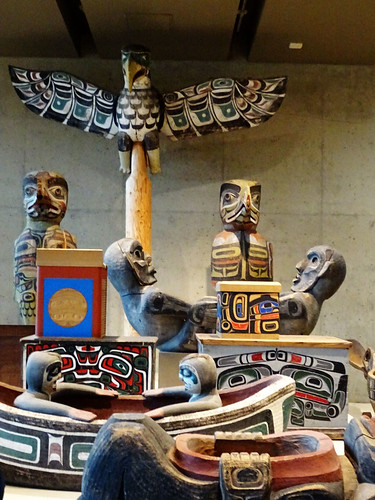 4 thoughts on “Vancouver: The Weird and the Wonderful”